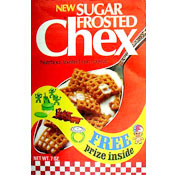 
This cereal was described on the box as a "nutritious toasted corn cereal."

Submitter: jeffrey
Uploaded: 11/17/2010
Additional details
Upload an image for this cereal
Comments About This Cereal
What do you think of Sugar Frosted Chex?

Before the health food craze, before the word sugar was dropped from cereal names, before people found out that sugar was actually bad for you, this was my now health food fanatic Mom's favorite cereal when it came out in the late 1960's. It was a small box and much more expensive than the other Chex cereals that came in boxes twice the size. Mom had her private orange box that us kids were only allowed to have a child's handful of and to me the flavor was heavenly. Whomever got to Mom first when she first opened a new box got the prize. I still have a blue marble that's flat on one side. Ah the good ole days if innocence and ignorance.