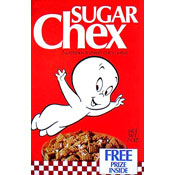 From: Ralston
Introduced in 1970


Featuring Casper The Friendly Ghost on the box, this cereal described itself simply as a "nutritious toasted corn cereal." The only known box featured a "free prize inside" (although it didn't specify what that prize was) and an offer on the back of the box for two Casper Hot 'n Cold Tumblers. 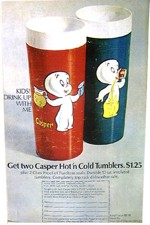 Submitter: DeeJay
Uploaded: 10/17/2008
Additional details
Upload an image for this cereal
Comments About This Cereal
What do you think of Sugar Chex?

My favorite version of Chex as a kid. Really wish these were still around.

My favorite Chex cereal as a kid growing up in the 70's! Wish they would bring it back. Honey Nut Chex is the closest thing but not quite the same.

This cereal, SUGAR CHEX, was shortened by name from SUGAR FROSTED CHEX.

I'm 50 years old and cannot forget this cereal. It was SO good. The most delicious cereal ever. I keep wishing Chex would bring it back. I've tried putting sugar on Corn Chex to emulate the flavor, but it doesn't compare. Such a simple concept, but no cereal on the market is like it, anymore.