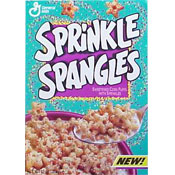 
This cereal was described on the box as "sweetened corn puffs with sprinkles." The cereal pieces were shaped like stars with holes in the center.

A television commercial from 1994 gave a nice description of the star-shaped pieces:

The cartoon spokesman for Sprinkle Spangles was a purple character named "The Genie". The side of one cereal box gave some valuable insight into the character:

He appears like magic,
In a flurry of sprinkles,
As the kids stare in awe,
Their eyes are a twinkle.

Full of magic and wonder,
He's a genie no less,
Every one of his wishes,
A sprinkly success.

"You wish it, I dish it,"
He says with a boast,
As he grants all the children,
What they want the most.

And what do they want,
Sprinkle Spangles no doubt,
His most sprinkly creation,
That makes kids want to shout!

So wish real hard,
And believe in him too,
And he just may grant,
Sprinkle Spangles to you.


The side of the introductory box gave this description of the cereal:

It's here! The first breakfast cereal covered with sprinkles! That's right, sprinkles! It's everything you've been wishing for, a crisp, delicious tasting cereal with rainbow colored sprinkles. Sprinkle Spangles makes breakfast extra special because on each tasty piece are more sprinkles than you could ever wish for! Pour yourself a bowl and see if you don't agree: It's Every Kid's Wish Come True! 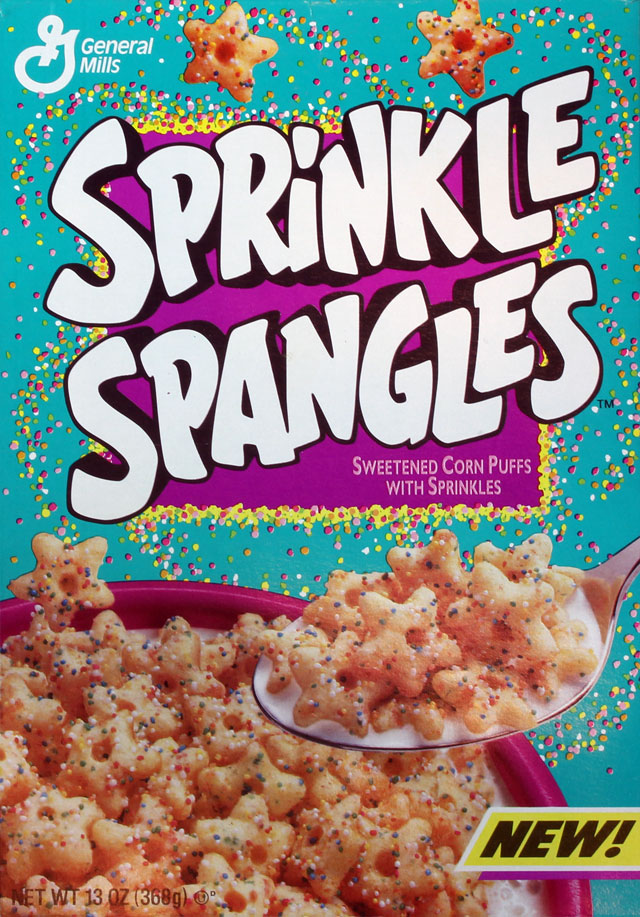 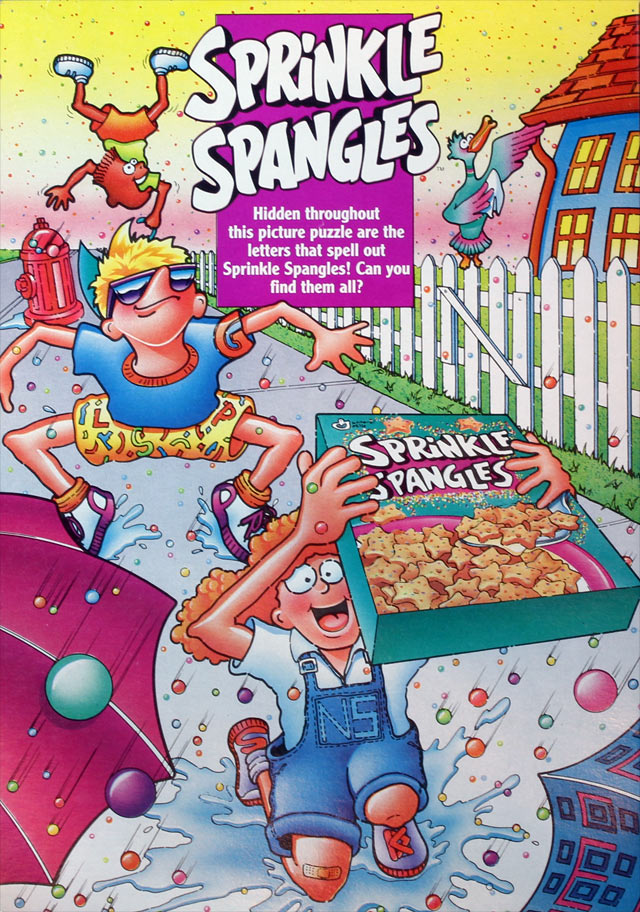 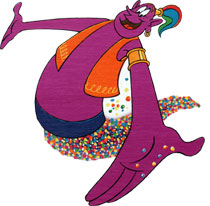 In television commercials, this magical cereal spokesman was voiced by Dom DeLuise, an American actor and comedian best known for acting with Burt Reynolds in the films The Cannonball Run and Smokey and the Bandit II.

The genie's catchphrase was "You wish it, I dish it." 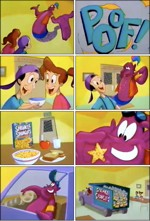 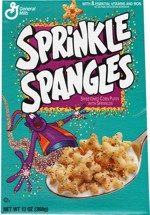 Submitter: metalynith
Uploaded: 1/18/2010
Additional details
Upload an image for this cereal
Comments About This Cereal
What do you think of Sprinkle Spangles?

Please bring this back! I searched for this cereal for the bulk of my childhood!

Please bring this cereal back out into the grocery stores! This is a childhood favorite of mine and I would just absolutely love to relive those memories again!

This was an usual cereal, in a good way. They were shaped like stars and tasted good with sprinkles on them. It's a really unique concept for a cereal. I heard the sprinkled donut Cap'n Crunch that is currently on the market is supposed to taste similar to these. I remember loving these though.

Please bring back Sprinkle Spangles! I loved these as a kid, and even asked for a box as a Christmas present! They were so good that I used to eat them right out of the box. PLEASE BRING IT BACK!

I think we bought these once and my dad had to finish the box because my siblings and I thought it was gross. Lol.

I need this back in my life!

I have been trying to figure out what I've been craving for weeks now, it's Sprinkles Spangles! I'm 25 now and it was discontinued at most when I was six. Please Please Please! Please bring it back! Or any popular 90's cereal that was so cruelly cut from our lives!

I MISS THIS CEREAL!! I used to call it sprinkle cereals! As a 90s kid, this was probably the only cereal I loved eating and still remember the taste. PLEASE BRING THIS CEREAL BACK! The generation now has to try this greatness!

Omg! I FOUND A MATCH! It's so funny that there is even reviews like this on here. I actually looked this up on here to show my ex what this cereal was. I love eating cereal all the time. Mainly at night for my dessert. Anyway she was bragging about a new cereal she had bought. I seen it and told her it looks like the old Sprinkle Spangles. I talked about over the last decade that was and still is my all time favorite. So I tried it and guess what... It's back baby!!! At least real darn close! They are round though with a little less sprinkles but the same taste. It's CAPTAIN CRUNCH's Sprinkled Donut Crunch. It's new so some stores might not have it yet. But Walmart has it she said. I'm so freakin' happy!