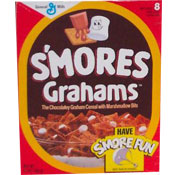 From: General Mills
Introduced in 1982


This cereal was promoted with the tagline, "So crisp, so fun, so delicious!" It was described on the box as "The Chocolatey Graham Cereal with Marshmallow Bits." One package encouraged consumers to "have s'more fun." 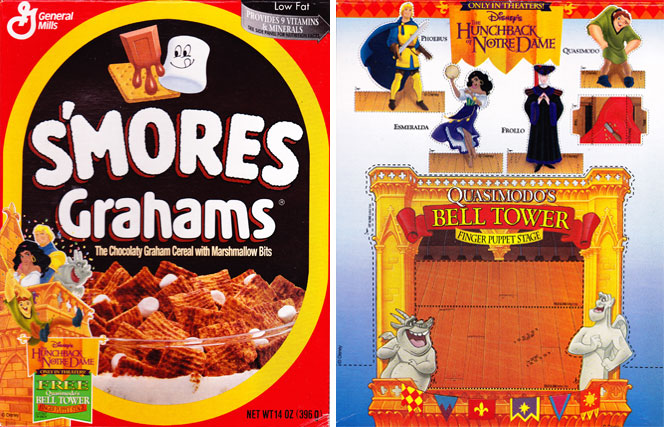 The following description is from one of the early boxes of this cereal:

"S'mores Grahams cereal is made with real cocoa, tiny marshmallows and hearty graham wheat. S'mores Grahams - so crisp, so fun, so delicious, your whole family will ask for 'S'more!'

"The tastes that make up S'mores Grahams: Crispy Graham - like real graham crackers; Chocolate Flavor - from REAL COCOA on every graham square; (and) Marshmallows - just the right amount in every box." 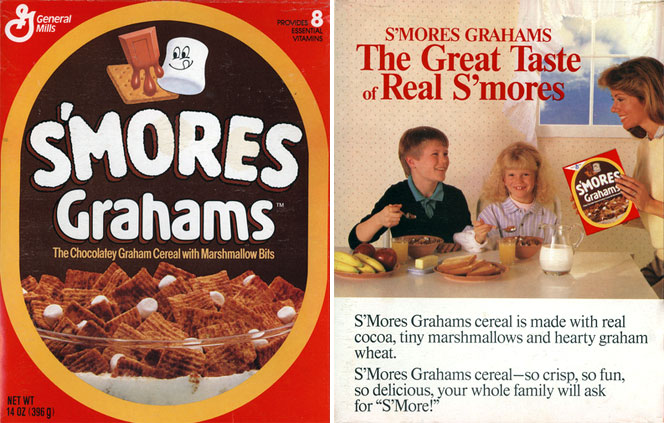 This cereal was re-branded as S'mores Crunch shortly after its introduction.


Click here to see all cereals from General Mills.
This cereal belongs to the following Mr Breakfast Cereal Families:
Upload an image for this cereal
Comments About This Cereal
What do you think of S'mores Grahams?

I remember eating a lot of this back in the late 80's when Nintendo (maybe only Canadian) was doing a promotion to win a NES. Entries to the contest also got a free subscription to Nintendo Power Flash, which in turn got me to subscribe to Nintendo Power for 10 or so years! The cereal itself was amazing, so it was definitely a win all around.

This (and Strawberry Krispies) were my favorites as a kid! This NEEDS to come back. Kellogg's version just isn't as good.

The best cereal I ever ate. Bring back S'mores Grahams!

I still dream about tasting this cereal again, there is nothing like it. The BEST cereal. PLEASE BRING THIS ONE BACK.

Brings back memories. Please bring it back. My kids would love to try it.

I LOVED this cereal. It was a great memory of my childhood! It would be amazing if they brought it back!! Until then, I have started eating the Chocolate Toast Crunch with the smallest marshmallows I could find. It's bringing back the memories :)

I miss this cereal. S'mores Grahams were really, really tasty.

This was a great cereal! I still talk about it. Please bring it back!

I agree. By far, this is the best cereal someone could taste. Recently, I bought a Kellogg' brand named "SMORZ"... it's very similar to Smores Grahams, even in the flavor. The tiny marshmallows are practically the same style and size, and the crunchy crackers are puffy. Maybe it's been a long time since the last time I ate the General Mills version, but in my personal perspective, both have the same flavor. Try it and gimme your opinion.