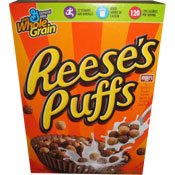 
Originally called Reese's Peanut Butter Puffs when first launched in 1994. We believe the name was transitioned to simply Reese's Puff around 1999.

A lot of ads this for this cereal, around 2000 and 2001, had someone (usually an overly hip, hyperactive kid) saying they had Reese's for breakfast. To which the other person (usually another cool-to-the-max tween) would reply, "Whoa! You had candy for breakfast?"

Company Description: Officially created in 1928, General Mills traces it's history back to the 1860's and the ownership of two flour mills. Since then, the company has become the world's 6th largest food company - marketing to over 100 countries... Read on and see all cereals from General Mills
This cereal belongs to the following Mr Breakfast Cereal Families:
Reese's Puffs Cereal Theater

2007 Reeses Puffs Cereal Commercial
Upload an image for this cereal
Comments About This Cereal
What do you think of Reese's Puffs?

The commercials were always so fun! As a kid, eating this cereal was the best part of my mornings. Though it's not exactly Top Tier for me tho (but def prefer it over the candies ngl). However I do remember that website that allows you to make your own raps, design your character and also let's you listen to others' creations. Very good cereal.

I liked the Reese's Puffs game on the ad I got once.

It's so good, kinda pricey though.

The best cereal that I have ever had in my whole life!

I'm always a touch frustrated with the flavor, despite their manifold tweaks over time. Still, I enjoyed it a lot back in the day.

Great cereal, but the commercials were not so good.

My daughter and I came up with this cereal idea when stationed at Camp Pendleton in 1992. The company forged my signature on a release and stole it, which is why we allow none of the conglomerate's products in our house today.

Very tasty cereal! One of my all-time favorites!

A sweet and crunchy way to start off the morning! The chocolate and peanut butter pieces aren't as rich as Cocoa Puffs or Cap'n Crunch peanut butter, but they taste great together like Reese's does.

This cereal is a must have in my house. It's on every shopping list because we always need more. I would love to have my son on one of the Reese's Puffs commercials. He would love that.