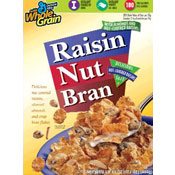 A television commercial that introduced the cereal had the following narration:

Company Description: Officially created in 1928, General Mills traces it's history back to the 1860's and the ownership of two flour mills. Since then, the company has become the world's 6th largest food company - marketing to over 100 countries... Read on and see all cereals from General Mills
This cereal belongs to the following Mr Breakfast Cereal Families:
Raisin Nut Bran Cereal Theater 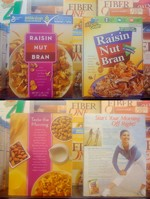 Submitter: Mr Breakfast
Uploaded: 10/6/2008
Additional details
Upload an image for this cereal
Comments About This Cereal
What do you think of Raisin Nut Bran?

One of the very few cereals that I regularly buy at full price.

Having trouble locating this product. Has it been discontinued?

I haven't been able to find this cereal in any stores in our area. Has it been discontinued? It is the only cereal my husband will eat. Frustrated in Sandy, Utah!

I usually love this cereal but in the last box the raisins were like rocks and I was very disappointed. I don't understand why they are so hard that I cant chew them.

I bought a box of Raisin Nut Bran from Hy-Vee east in Norfolk, Nebraska. I would try it for the first time.

They don't cover the raisins in nuts anymore and cover them in candy stuff. Otherwise, it's great (p.s. still wish they put almonds around the raisins).

I wish all grocery stores would have Raisin Nut Bran Cereal in stock. It is the best cereal on the market.

Whenever I eat cereal... I eat this cereal! I love this cereal. The flakes don't go soggy, like some other brands. The nut-covered raisins, make it even more delicious! I usually like a big breakfast, but this satisfies me. I just wish it didn't cost so much... but... I guess... you get what you pay for. The cost is well worth it! I shopped until I found it! Well worth the trips!

My 6 kids love this cereal but alas, my 'rule' is that I will only spend $2 per box of cereal. Most of the cereals go on sale for 1.99 fairly regularly, but not Raisin Nut Bran. I never see coupons for this cereal either. If I could find a coupon to bring the price closer to the $2 mark, my kids would be happier in the mornings with their beloved cereal.

This is the best cereal ever! Although it would be even better with more nuts and raisin.