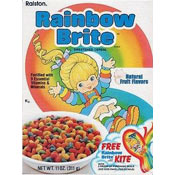 
The introduction of this cereal coincided with the release of the 1985 movie Rainbow Brite and the Star Stealer. The Rainbow Brite animated TV series debuted a year earlier in 1984. This product was described on the box as a "sweetened cereal" with "natural fruit flavors" that was "fortified with 9 essential vitamins & minerals".


A television commercial for Rainbow Brite described it like this:


The back of an early box introduced the cereal with a brief story about the world of Rainbow Brite:

"If you go to the end of the rainbow, to a place far, far away, you will find a magical kingdom called Rainbow Land where all the colors of the world are made. In Rainbow Land, there lives a lovable and creative little girl named Rainbow Brite. Rainbow Brite loves the colors of the rainbow so much, she uses these colors to make the world a brighter and happier place for everyone. But two mischievous creatures named Murky Dismal and Lurky, who live in a place called The Pits, dislike everything colorful and joyful. They want to capture Rainbow Brite and take all the color from the world.

"Now you can bring the magical world of Rainbow Brite to your breakfast table every morning with Rainbow Brite Cereal... let Rainbow Brite color all your dreams happy, and your mornings bright." 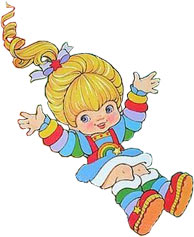 Rainbow Brite was introduced to the world by Hallmark Cards in 1983. A year later, the lovable and creative little girl from Rainbow Land made her animated TV debut in a special called "Peril in the Pits". Other specials followed and by 1986 she had her own weekly television series. (The earlier special were broken into multiple parts and were included as part of the TV series).

click to enlarge
Wake Up to Rainbow Brite Box 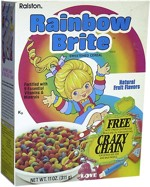 Submitter: pancakegirl
Uploaded: 3/26/2009
Additional details
Upload an image for this cereal
Comments About This Cereal
What do you think of Rainbow Brite?

After Ice Cream Cones, this was my favorite cereal. It was like Trix, only better, because of the smaller sizes of the pieces. Oh man, I can taste the fruity crunch right now!

Please bring back this cereal. I remember going to the grocery store before school and crying because we couldn't get any more.

How fun would it be - if just for a limited time, they brought this back with Strawberry Shortcake cereal. I know that I'd stock up.

Loved and miss this cereal!

This was my favorite cereal! Please, please bring it back please!

I cried the day they took this cereal off the shelf. Please bring Rainbow Brite!

I loved this cereal. We need them to bring it back.

I miss this cereal! It was the best. Where can I buy it? I had the kite too. I wish I still had it! I love Rainbow Brite to this day!

Bring back this good old cereal. Rainbow Brite was the best!