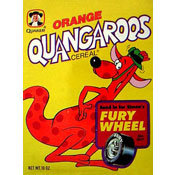 From: Quaker
Introduced in 1973

The back of one of the boxes described the cereal this way:

"Get hopping with Orange Quangaroos! A one ounce bowl of Quangaroos gives you 100% MDR of sunny vitamin C. It's the sweet sunny way to put bounce in your breakfast." (In the 1970's, MDR stood for "Minimum Daily Requirement".) The cereal pieces were round and orange in color.

Quangaroos was a spin-off. Nearly a decade earlier in 1965, Quaker introduced two cereals simultaneously, Quisp and Quake. The two cereals were promoted together. The usual story line of an ad had the cereals' opposing mascots (Quisp and Quake) giving each other the business over whose cereal was better. In 1972, Quaker let consumers decide which cereal was best by having a vote. The losing cereal was Quake and it was discontinued as soon as the ballots were counted.

Very shortly after Quake Cereal got the ax, Quake's Orange Quangaroos came on the scene. The cereal box and commercials featured the character Quake in a supporting roll to a new mascot, Simon The Quangaroo. Like Quake cereal before, Quangaroos were pitted against Quisp in advertisements. The public once again choose Quisp - this time casting votes with hard-earned dollars - and Simon the Quangaroo never lived to see his 5th birthday.

The reason Quangaroos never took off had to do more with the flavor of the cereal than the popularity of it's mascots. Consumers were split over the cereal. Those who liked it found the orange flavor to be original and genuinely orangey. They liked how the milk would turn orange. Those who didn't like the cereal often referred to a metallic aftertaste.

While Quangaroos didn't last long, the mascots Simon and Quake are still very popular among cereal enthusiasts. Those characters, along with Quisp, were created by Jay Ward and Bill Scott, who also gave the world Rocky & Bullwinkle and Cap'n Crunch. Cereal boxes of Quisp, Quake and Quangaroos are treasured by collectors. To own one box of each cereal has been referred to as the Holy Trinity of Cereal Boxes.

Know premiums in Quangaroos: a 2-in-1 fun bowl, a fury wheel, a gyro scrambler motorcycle toy and a Quangaroo Soapbox racer. 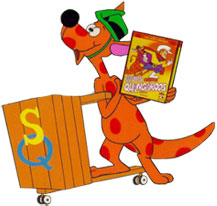 The Cary Grant-esque voice of Simon the Quangaroo was provided by vocal actor Bill Scott.

In addition to giving voices to Bullwinkle, Dudley Do-Right, Mr. Peabody and George of the Jungle, Scott also acted as a head writer and co-producer on many animated programs. 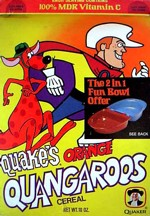 Submitter: Mr Breakfast
Uploaded: 5/22/2008
Additional details
Upload an image for this cereal
Comments About This Cereal
What do you think of Quangaroos?

This was not the best. Glad it ended.

Best cereal EVER! New Orange Cream Pop Crunch from Cap'n Crunch is a little close, but not nearly as good as I remember this cereal being.

I loved the cereal as a kid and often wished it would come back. With milk, it tasted like a Creamsicle or an Orange Julius. It was great! If it becomes available I want to know!

A friend and I spent a summer going to a convenience store to buy rolling papers and then hang out in a park or a vacant lot. Then we would return to the store to get soda and candy. We would take 45 minutes to visit the breakfast cereal section and laugh at the brightly colored boxes. Our favorite was Orange Quangaroos. We named it the Quangaroo Summer. We also liked to laugh in the pet food section and the pet care products, but Orange Quangaroos was our absolute favorite.

My wife and I loved Quangaroos. We would love to have it again. She and I would eat it (dry) in a large bowl while watching TV. Bring it back... today!

I would like to know if they still make Orange Quangaroo cereal and if so how can I purchase them.

Fabulous cereal. Not enough "prize" offers. I had a Qwisp motorized propeller hat, and my brother had Quake's light up miner's helmet. Don't know what they could have done with the kangaroo, but...

I loved this cereal. I wish you could still buy it. And I'm 49. Was the perfect Saturday morning watching cartoons with a bowl of Orange Quangaroos. Bring it back Quaker!