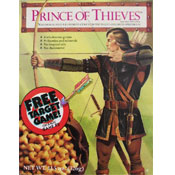 
This cereal was released as a tie-in with the 1991 movie Robin Hood: Prince of Thieves starring Kevin Costner. It was described on the box as a "naturally-fruit-flavored cereal with multi-colored sprinkles." The cereal pieces were meant to resemble little arrows, but unfortunately, they more resembled tiny, spotted penises.

The movie tie-in aspect of the cereal is quite strange as there's no mention of the movie Robin Hood: Prince of Thieves on most boxes except for "PRINCE OF THIEVES characters and related indicia are trademarks of Morgan Creek Productions, Inc." in very small print. The illustration of Robin Hood on the box in no way resembles Kevin Costner. 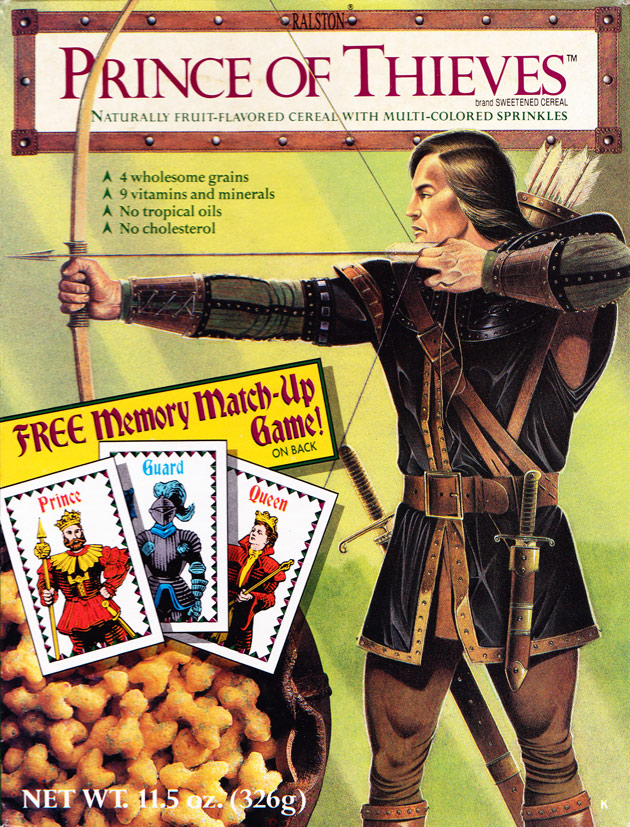 The box that we acquired features a "Free Memory Match-Up Game" on the back. It consists of cut-out cards of general characters like a King, Queen, Archer and Guard. This again points to the odd movie tie-in as you'd expect to see characters from the film instead of generic equivalents. 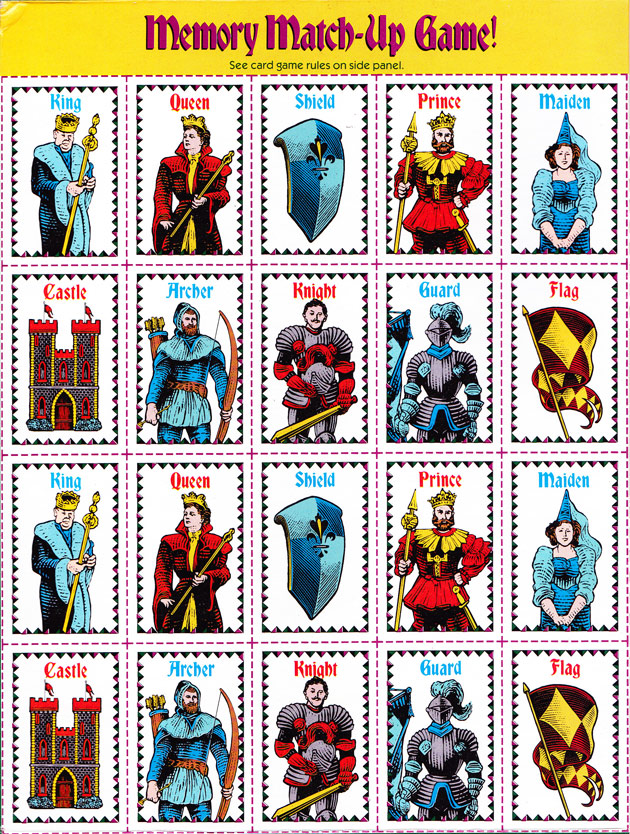 Another version of the box featured a "Free Target Game" with cut-out arrows on the side of the box and a cartoonish, medieval-themed target board on the back. Another had a cut-out castle on the back.

We believe this cereal remained available in stores just shy of 2 years.


Click here to see all cereals from Ralston.
This cereal belongs to the following Mr Breakfast Cereal Families:
Additional Images

Submitter: Mr Breakfast
Uploaded: 6/13/2008
Additional details
Upload an image for this cereal
Comments About This Cereal
What do you think of Prince of Thieves?

This cereal was pretty good. I remember having it twice around the time the movie came out. Ralston really made some pretty good cereals despite them being a branch of Purina, the dog food company. This is another cereal that got pulled from the shelves way too early, as most of the good ones do.

LOVED this cereal as a kid. I wish someone would remake it!

The pieces were shaped like arrows, if I remember correctly. It had a fruity taste but the pieces weren't fruity colors. I liked it as a kid.

And yet, the people at Safeway got all huffy when I tried to walk out of the store with a box I didn't pay for. Go figure.

I remember having this cereal as a kid. I was born in 1988 and it was around the early 90's when Robin Hood with Kevin Costner came out. Of course they make a cereal for it and it actually turned out to be great tasting cereal. I remeber and distinct fruity flavor and I remember the red crunchy sprinkles on the cereal was like eating candy in your mouth. It was great and came with a poster too which I remember was of Kevin Costner holding a flaming arrow in his bow ready to fire. I wish someone could make a cereal tasting like it as I remember I had a cereal that came close to the flavor. It is hard to describe the taste but after all these years I still long for it. I imagine it was before all this health-craze diet foods so the cereal probably was horrible for a kid to eat but that is wha made it so good.