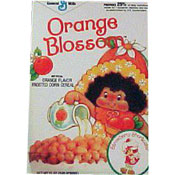 From: General Mills
Introduced in 1981


This cereal was described on the box as an "artificial orange flavor frosted corn cereal".

Company Description: Officially created in 1928, General Mills traces it's history back to the 1860's and the ownership of two flour mills. Since then, the company has become the world's 6th largest food company - marketing to over 100 countries... Read on and see all cereals from General Mills
This cereal belongs to the following Mr Breakfast Cereal Families:
Upload an image for this cereal
Comments About This Cereal
What do you think of Orange Blossom?

Orange Blossom Cereal was released AFTER Strawberry Shortcake - not before. The first box was not until July 1983. I have a series 1 box and it is dated July 1983.

Please bring back this cereal. My late sister and I were unable to purchase these kinds of breakfast foods due to our parents budget, but we're able to try them at friends houses. We both loved the commercials and owned a strawberry shortcake doll, so we always hoped for the cereal. Please, please, please bring back Strawberry Shortcake and Orange Blossom cereal. It would be so nice to be able to enjoy them now.

Didn't Strawberry Shortcake's cereal come out before Orange Blossom's? Then again, I never even knew SSC had a cereal to begin with, so what do I know?

This cereal was so delicious! I clearly remember eating it back around 1983 or 1984 with my brother, who also loved this cereal even though it was marketed with a girl's cartoon. It was orangey flavored, sweet, but not overpowering. I would eat this cereal everyday if they made it again! My mother and brother also said they wish they still made this cereal.

I remember Orange Blossom. She had a pet butterfly named Marmalade. Her cereal looks like Orange-Flavored Kix. I never tried it. Our little community store never got the the fun cereals. But our TV got the cartoon, so that was good.