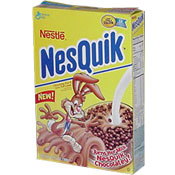 
Chocolate-flavored puffed cereal made from rice and corn based on the popular Nestle Quik chocolate milk mix. The box boldly declared, "Turns your milk Nesquik Chocolatey!" An early TV ad used the tagline, "A chocolatey blast for you and your milk!"

Many people have said NesQuik cereal reminded them of Cocoa Puffs with smaller pieces.

The mascot for the cereal was the NesQuik Bunny, also known as "Quicky The Bunny." 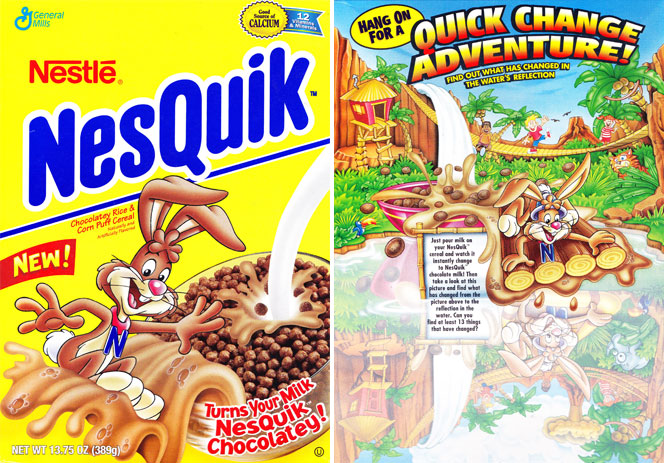 The box that we obtained featured an activity panel on the back called "Hang On For A Quick Change Adventure" with instructions that read, "Just pour milk on your NesQuik cereal and watch it instantly change to NesQuik chocolate milk! Then take a look at this picture and find what has changed (in the water's reflection)."

The first 5 ingredients listed on the nutrition panel for this cereal were rice and corn flour, sugar, cocoa, partially hydrogenated soybean oil and modified wheat starch.

2001 NesQuik Cereal Commercial
Upload an image for this cereal
Comments About This Cereal
What do you think of Nestle NesQuik?

This stuff was even better than Coco Puffs! I only had a few boxes before it was gone, but oh boy was it good!

I loved this cereal. Bring it back please.

This was always my all-time favorite cereal ever! And I don't like many cereals. I am 24 years old and I want to taste those chocolate circles again. Bring them back!

I liked this cereal a lot when I was a kid way back in 1999. I wish I could try it again today. I remember it having a better chocolate flavor than Count Chocula, Cocoa Pebbles or Cocoa Puffs - all of which I also loved.

I did wonder if anyone Nestle made a connection between the cereal's look and its mascot. The now-gone Book Of Ratings also noticed this.

If you buy it at this link and buy a lot of boxes, the shipping will come out pretty cheap. If you buy 10 or 20 boxes at one time, the seller will probably give you free shipping. Ask him and he will tell you. It's an import. You can't find it in the US. (http://www.amazon.com/gp/product/B007YN82NS)

To the user named "luckycharms"... I lived in Baja every summer with my familia. I know all of the grocery stores but when I try to purchase something, it's like they don't GAF... Is Calexico still around? I asked 2 of my primas to send me some boxes since they get their mail in San Ysidro, but they are so lazy. I bought a box FROM E Bay, but it cost me close to $20.00. I am just asking for a way TO buy this cereal without paying too much. Thank You! - FrankiesMom

I want my chocolate cereal back. PLEASE bring it back! It was the greatest cereal ever. Why do all good things go away?

You can get it on Amazon but it's highly priced.

I loved the chocolate milk so much.