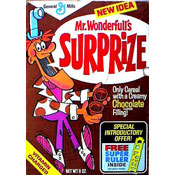 
Mr. Wonderfull's Surprize was promoted on the box as the "only cereal with a creamy chocolate flavor filling!"

While the concept was "wonderfull", many of the flavor-filled puffs burst sometime time between production and the breakfast table, leaving the consumer with a bowl full of hollow puffs and small glops of hardened filling.

This cereal also came in a vanilla variety.

Submitter: jeffrey
Uploaded: 10/15/2010
Additional details
Upload an image for this cereal
Comments About This Cereal
What do you think of Mr. Wonderfull's Surprize - Chocolate?

I have gone so far as to reach out to the company to ask them to make it again. They answered that they have no plans at this time. Maybe if more people asked them.

Wish they would bring it back. I don't remember that wrapping of it. Was there another wrapping of just the clowns face? I loved it so much. I'm 53 and I still remember it.

This cereal was absolutely the best ever. My brother and I liked the chocolate the best, however, we would often mix the chocolate and vanilla varieties together. We often ate this cereal as a snack. I find it hard to believe with all of the cereals out there today, (i.e. cookies, and other obviously sweet cereals, and even the chocolate trends in many other cereals) that this one was so bad in sugar content or otherwise. I have tried Kellogg's "Krave" cereals, also chocolate-filled. They're okay, but nothing in comparison to Surprise. I'm sure that with today's advances in production, their problems making the product could be resolved. Heck, market it as a snack instead of a breakfast cereal. If it ever came back, I would buy it forever 100%. By far, the most awesome cereal ever.

This is my all time favorite cereal... I still have two of the Premiums (Prizes) from when I was 7 y/o. They are little plastic green capsule (Clamshell) with his face on both sides and an intact 3D Puzzle. I want to wish they would bring it back... but it was like eating a milky, crunchy, pudding filled sugar bomblet. lol

One of my favorites from back in the day. I think it was almost all sugar with just the right amount of chocolate. One mouthful would almost melt your teeth. I remember this being on the market for only a short time in the mid 70's. My mom told me it was discontinued due to the high sugar content and little nutritional value. I thought she was lying and went to the store with her a few times just to see if it was really on the shelves, but it was gone!

This cereal was awesome, we'd eat bowls of it and it had so much sugar in it it made the great Cornholio seem like a poster child for Narcolepsy.

Please find the recipe and bring this cereal back. I would love to have a sweet snack at night that isn't as heavy as a dessert. If you get 100 votes, will you? Please...

Mr. Wonderfull's Surprise was my favorite cereal ever. I was so sad when they took it off the market.

That cereal box is great. However, this American girl has never in her life eaten or even seen Mr. Wonderfull's Surprize. It sounds kind of bad. I just Google'd it. It's terrifying, but where is this boat you speak of? I didn't see it on any of the images I found.

Oh my GOSH - we loved this cereal as kids! Nobody we've talked to even remembers it. Wish it would make a comeback, even for a little while!