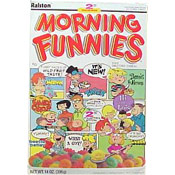 
According to the box, this cereal was comprised of "funny faces of wild fruit taste - it's so crunchy".

The packaging of this cereal was innovative in that the back panel - already loaded with comics (aka Morning Funnies) - folded out to reveal another full page of comics.

Some of the characters that appeared in the Morning Funnies were Dennis the Menace, the Family Circus family, Popeye, Beetle Baily, Luann, Hagar the Horrible and Funky Winkerbean.

Additional Images
These are the most recent images. Click here to see all pictures for Morning Funnies.


Upload an image for this cereal
Comments About This Cereal
What do you think of Morning Funnies?

The box was much better than the cereal was. I wanted it as a kid... but ended up regretting buying it.

I remember the reason this bombed so bad. It was not the comics themselves, but the cereal itself WAS HORRIBLE!:(

Proof that everything can be found on the internet (if perhaps sometimes by accident). I had one box of this when I was seven or so, and have been trying to figure out what it was for years. Hooray!

I don't remember this one but what a great idea! My kids would love the comics attached to the box.