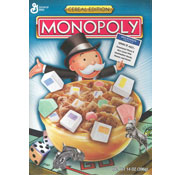 
The front of the cereal box showed the Monopoly game's mascot, Rich Uncle Pennybags (aka Mr. Monopoly), holding up a card the read, "Delicious Indeed. Own it all!... sweetened wheat & rice cereal with marshmallow deeds, houses and hotels."

The cereal was produced via a license with Hasbro.

It's believed that this cereal was actually Cinnamon Toast Crunch with added marshmallows. The first 3 ingredients listed on the side panel were whole wheat, sugar and marshmallow bits. 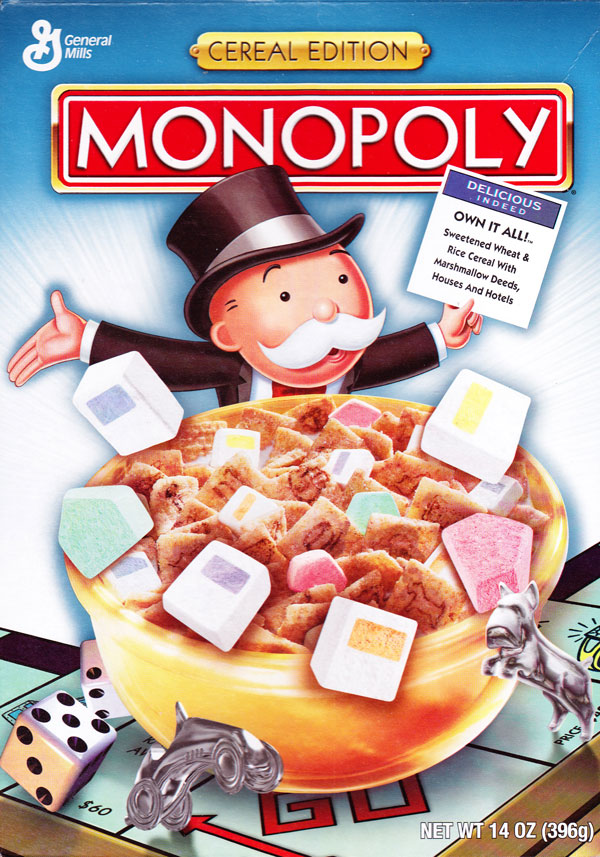 The box offered the following factoids about the Monopoly game:

"Who's that guy again? Ever wonder who that guy in the top hat is? His name is Mr. Monopoly. His wife's name is Madge. That guy in jail is Jake the Jailbird. And the policeman who sent him there is Officer Edgar Mallory.

"Most Taken Tokens Over the years, there have been more than 20 different Monopoly game tokens in the classic game. The top four of all-time are, in order, the Race Car, Top Hat, Dog and Iron. What's your favorite?

"Another Factoid We have made jewel encrusted games, chocolate games and even giant granite versions. 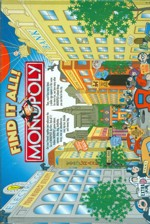 Submitter: Matt L.
Uploaded: 7/20/2010
Additional details
Upload an image for this cereal
Comments About This Cereal
What do you think of Monopoly?

Looks fun! They should bring it back.

Why does General Mills pull cereals like Monopoly that taste great? Do they still make it and how can I order it?

Easily the greatest cereal of ALL TIME. It was puffed cinnamon toast crunch pieces (like french toast crunch) as deeds and the marshmallow pieces (lucky charms) shaped like monopoly game pieces. BRING IT BACK!

This was the best cereal ever! I wish it was still available, but it is possible to recreate it, now that you can buy bags of cereal marshmallows. I bought a bag from thinkgeek.com and bought a box of Cinnamon Toast Crunch and made my own Monopoly cereal! It was wondermous!

Best cereal I ever tasted. It came and went too soon.

These promotional cereals never last forever, although sometimes they will be re-released every few years... I loved this cereal and I love Monopoly... bring it back... Nostalgic B.Z.K. Hero signing out

Never heard of it and I love this board game. One of the few actual "board games" I will play since technology took over. Now how about a "Bargain Hunter" cereal from the 70s! :-)

Why did they stop making it? It looks really fun. And... I think the idea of Cinnamon Toast Crunch with marshmallows sounds like a winner.

This cereal came out a few years ago and was for sale for only $2.99! That was a great deal and when I bought it, everyone in my household loved it! I was buying it all the time but now you can't find this cereal anywhere! It just disappeared from the grocery store shelves never to be seen again! I was and still am disappointed about that! We need it back on our shelves for customers to enjoy!!!!

Might be my all-time favorite cereal. A milder version of Cinnamon Toast Crunch enhanced by what might be the the most perfect marshmallows imaginable; someone at General Mills knew what they were doing when this recipe was conceived. It's a shame it doesn't exist in some iteration today, but such is usually the fate of cereals tied to an intellectual property, even one as beloved as Monopoly.