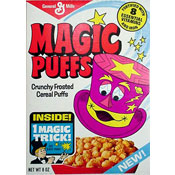 From: General Mills
Introduced in 1974


This cereal was described on the box as "crunchy frosted cereal puffs". It's mascot was a magic hat.

Shortly before this cereal appeared, General Mills had tested a cream-filled puffs cereal called Magic Hats whose mascot was a magic hat. It's suspected that the magic hat that appears on Magic Puffs' cereal box, was the same magic hat that promoted the failed cream-filled cereal.

Submitter: jeffrey
Uploaded: 11/1/2010
Additional details
Upload an image for this cereal
Comments About This Cereal
What do you think of Magic Puffs?

I remember when this cereal was pulled from the market. Claims were made the cereal's nutrition information was untruthful and it was little more than junk food.

According to the description, sounds like Kellogg's Krave and Telma/Manischewitz's Magic Max Puffs are the spiritual successors.