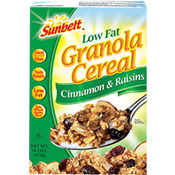 
This low fat granola cereal featured raisins and cinnamon. Other granolas from Sunbelt have included ingredients like bananas, almonds, dates, strawberries, raspberries and blackberries. In most grocery stores, Sunbelt cereals were priced a bit cheaper than more well-known brand granolas, even though Sunbelt's products were just as good, if not better, than those other brands.

Company Description: Sunbelt is a division of the McKee Foods Corporation, the same company that produces Little Debbie snack cakes... Read on and see all cereals from Sunbelt

Upload an image for this cereal
Comments About This Cereal
What do you think of Low Fat Granola Cereal?

We are looking for SunBelt Low Fat Cereal (Banana Nut, and Cinnamon & Raisin). My husband will eat only these two cereals, and now we cannot find it. It is the best in our opinion.

I really liked this cereal. Bought it on sale at Firelake Grocery in Shawnee, OK. Now they don't have it.