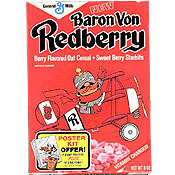 
General Mills introduced Baron Von Redberry cereal in or about 1972. The cereal was described on the box as being, "Berry Flavored Oat Cereal Plus Sweet Berry Starbits - Vitamin Charged!". The "starbits" were star-shaped marshmallow pieces similar to those found in Lucky Charms cereal. The flavor of the cereal has been described as being similar to fruit punch.

The cereal box mascot for Baron Von Redberry Cereal was a World War One-style German fighter pilot named Barron Von Redberry. The box featured an image of the character flying a red World War II plane with what appeared to be raspberries painted on its tail.

Concurrent to the introduction of this cereal , General Mills introduced a grape-flavored cereal called Sir Grapefellow Cereal, which featured a British fighter pilot in a purple plane with a bunch of grapes painted on the tail. 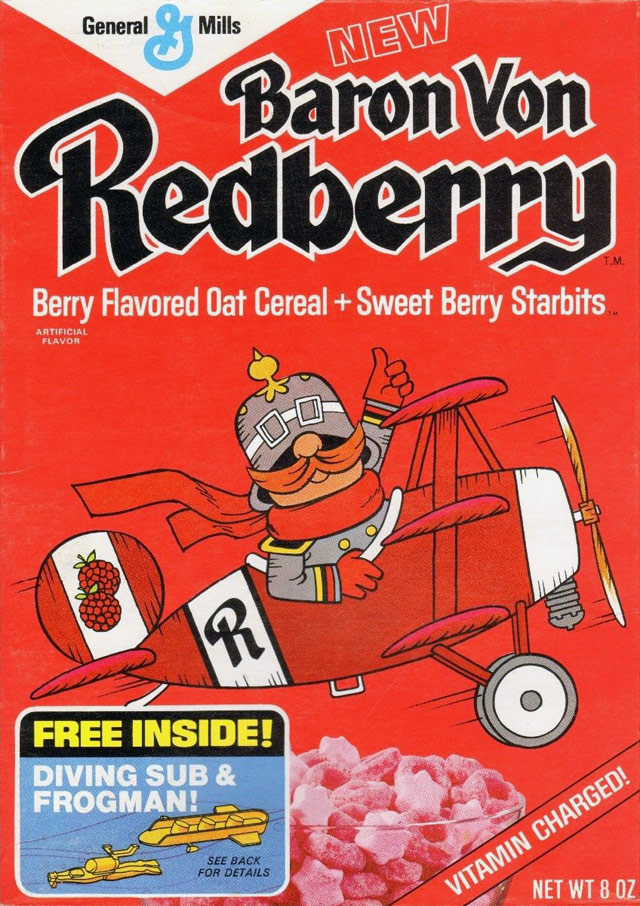 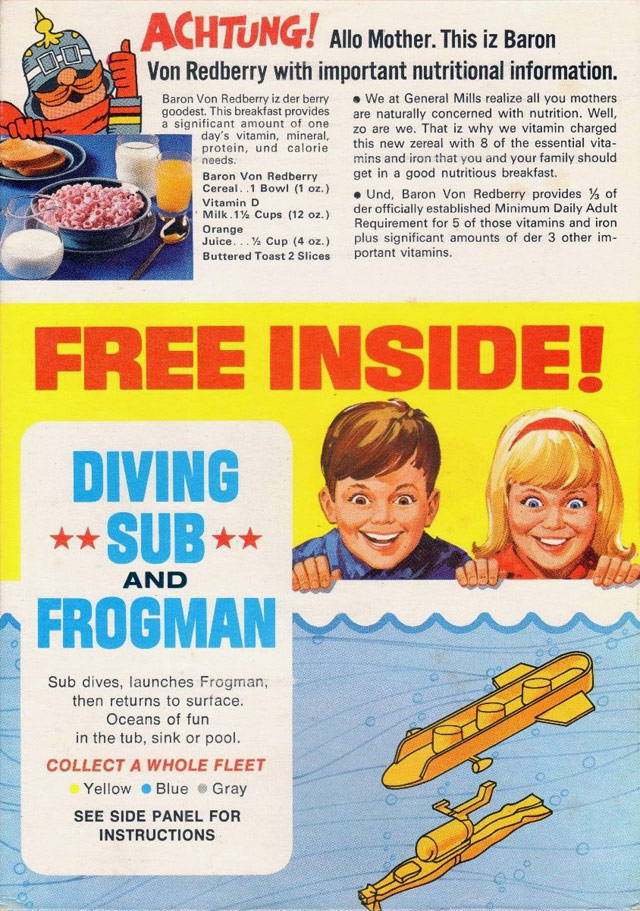 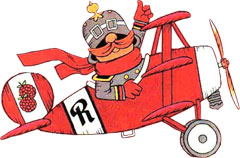 Beyond the obvious distinctions between the Baron and his cereal nemesis Sir Grape Fellow, it's interesting to note that the Baron was often pictured giving a thumbs-up hand gesture, while Grapefellow was more inclined to display a rounded thumb and index finger okay sign. 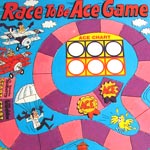 click to enlarge
Baron Race to Be Ace Back of Box 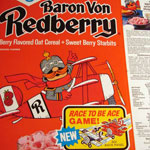 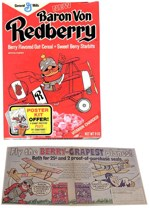 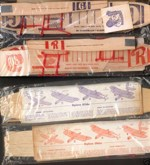 Submitter: kidpancake
Uploaded: 3/13/2008
Additional details
Upload an image for this cereal
Comments About This Cereal
What do you think of Baron Von RedBerry?

I was too young when this cereal came out... not even sure if it was available here in Western CANADA at the time. Looks very yummy. Thank you for providing some of the pictures!

This is the worst cereal I have ever tasted, at the time of paying for this cereal I was looking for it unlike I have before. All of this excitement changed as soon as I took my first bite.

I remember that this cereal tasted pretty good.

You know how General Mills brought back Yummy Mummy and Fruit Brute for Halloween. How cool would it be if they brought back Baron Von RedBerry and Sir Grapefellow for a limited run!

The description says "World War II plane." It should be WWI.

I remember these cereals way back when I was nine years old. I wish General Mills could remake these cereals like Redberry and Grapefellow once again, because I can relive them once again.

These were the best cereals ever! I even had a special spoon that I used for Sir Grapefellow and Baron Von Redberry!

I loved these cereals as a child! Wish they were still around!!