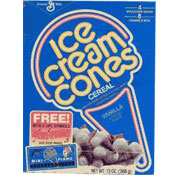 
"The great taste of ice cream cones, the goodness of four grains."

Ice Cream Cones cereal was available in two flavors: vanilla and chocolate chip. The cereals consisted of ice cream cone-shaped conical pieces and round Kix-esque pieces intended to resemble scoops of ice cream. If a cereal eater was so inclined, the scoop pieces actually fit comfortably on the cone pieces to create a tiny ice cream cone replica. 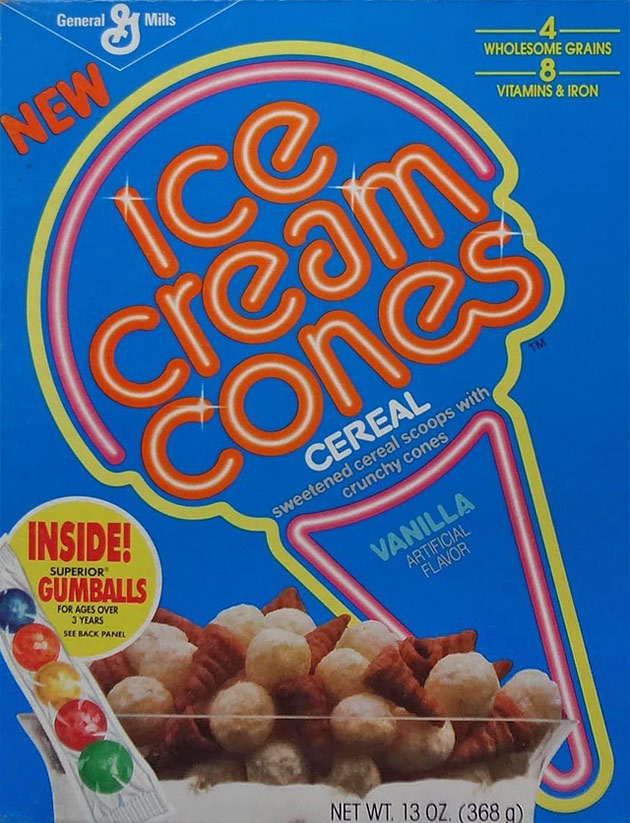 General Mills briefly reintroduced Ice Cream Cones Cereal in 2003 to celebrate the 100th anniversary of the first ice cream cone. According to Tommy Hillman, an associate marketing manager for the company at the time, "Ice cream cones have such a great connection with happy, carefree times. We're excited to offer a cereal that provides a fun new way to experience ice cream cones." 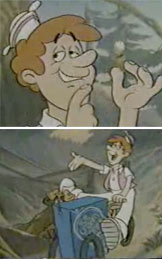 This red-headed soda jerk represented Ice Cream Cones cereal when it was introduced in 1987. His souped-up bike featured a cereal-box shaped ice cream freezer and pair of bells that would ring when he pulled a string.

Jones was often depicted overcoming great obstacles to deliver his cereal to waiting children. He has unwittingly fended off cereal-starved grizzly bears and been air-lifted by helicopter all in the name of delivering Ice Cream Cones cereal. 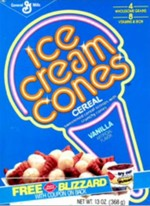 Submitter: Mr Breakfast
Uploaded: 4/28/2008
Additional details
Upload an image for this cereal
Comments About This Cereal
What do you think of Ice Cream Cones - Vanilla?

I am 35. I was three and remember this cereal and the commercial when they were out. I literally have like two memories from before I was five and this is one of them. They genuinely tasted great. I have tried finding the name of this cereal several times since I was a kid, of course never thinking it was the most obvious thing it could be. Really should bring back the original cereal, even if for a short period. People will buy it.

This stuff, in its original incarnation, was delicious. When they brought it back, it just wasn't the same... and the cones weren't even cone-shaped anymore!

Bring it back now. Loved it and would like to have it again. General Mills needs to listen to their customers and bring it back. Thank you.

Please bring it back! Best cereal ever. I also really liked the commercials.

It would be awesome if they brought it back. When it was out, it was the only cereal I ate. My ex-wife even liked it. Please make cereal eaters everywhere very happy, and re-launch this cereal.

Bring it back! I would definitely make sure my kids eat a bowl EVERY DAY!

They need to bring this one back!

They really need to RELAUNCH the 21st century Ice Cream Cones cereal! My daughter did a 'lets bring it back' project for her college class and this cereal was the #1 choice out of everything to bring back. Out of 1,000 students, 860 not knowing others choices picked this! SO LETS DO THIS PEOPLE!

Please bring it back! One of my favorites as a child!

I wish they still had this. Found it once about 4 years ago for a month at the local store and bought as many as I could. Then they were gone again. PLEASE BRING THEM BACK!