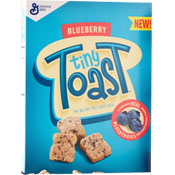 
In June 2016, General Mills announced 2 varieties of Tiny Toast Cereal: Blueberry and Strawberry. Like French Toast Crunch (also made by General Mills), Tiny Toast pieces are shaped like... you guessed it... tiny pieces of toast. The cereal pieces are coated in what General Mills is calling colorful, fruit-flavored "course powder" that reportedly smells and tastes like authentic berries.

It should be noted that - on the cereal boxes - the powder is called "blueberry powder" on the blueberry variety, but called "dried strawberry puree" on the strawberry variety.

According to company press materials, development of Tiny Toasts took about 1 year. They wanted the new cereal to have an "all-family appeal" like their top-selling Cheerios and Cinnamon Toast Crunch cereals.

The company grabbed media attention by announcing that Tiny Toast is General Mills' "first new cereal brand in 15 years." That statement is true if you exclude the many, many cereals they've introduced since 2001 that were extensions of existing brands or part of licensing agreements. If you take a look at our cereal timeline, you can see all the cereals that have been introduced in any given year.

The first 6 ingredients listed on the side panel for both varieties are whole grain oats, whole grain corn, sugar, fructose, rice flour and palm oil.

The following images are from General Mills press materials: 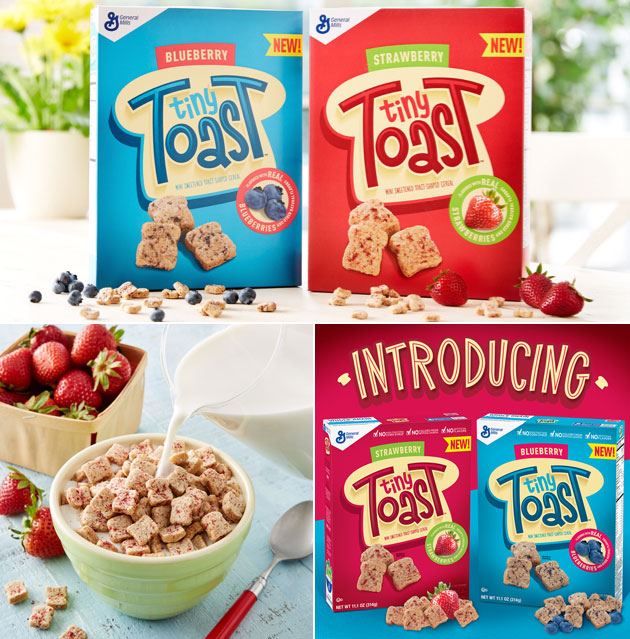 Upload an image for this cereal
Comments About This Cereal
What do you think of Tiny Toast?

I really wanted to like this. I tried the strawberry... and it's "eh". Way too much of a bread-like wheat flavor. I literally feel like I am eating a soggy loaf of bread. Bleh. That's the trouble with new cereals being introduced these days... they all have to have whole grain, with a mixture of them. Back in the day, most of the good cereals were corn based. I think if this cereal was JUST corn... it would be really good.

By I Love This

Get on these! They will definitely be gone soon - but I can't help but think that if they were released under a different name or a few decades ago that they would do a lot better. They taste delicious and have a great consistency that is oddly nostalgic of cereals from the 70s and 80s. I have only had the blueberry flavor but they are real good!

These are very tasty. I tried both the blueberry and the strawberry. I think the strawberry has a stronger taste, but both were really tasty cereals. They taste good to eat dry and taste good in milk. I'd highly recommend trying them before they are pulled from the shelves. I think they're the best new cereal of 2016 so far.