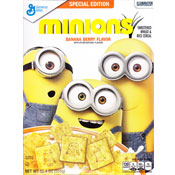 
This special edition cereal is described on the front of the box as a "sweetened wheat & rice cereal" with "banana berry flavor." The front of the box features Kevin, Stuart and Bob, characters from the 2015 animated film Minions.

The back of the box features a spot-the-differences puzzle with a scene of the Minions' characters in New York City. 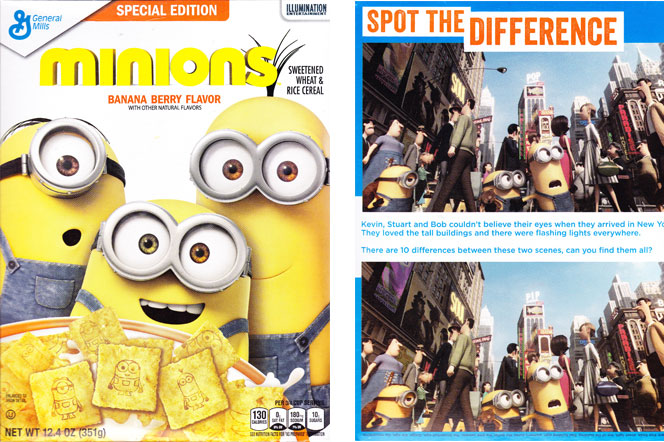 On the box, it appears that the cereal actually has stencils of the Minions etched into each Cinnamon Toast Crunch-shaped piece. In reality, some pieces just appear to be scribbled on.


Click here to see all cereals from General Mills.
This cereal belongs to the following Mr Breakfast Cereal Families:
Upload an image for this cereal
Comments About This Cereal
What do you think of Minions?

I love the Minions so much. So yummy in my tummy.

Interesting you don't see banana flavored cereal though my only complain is that you can't taste the berry little to none.

I hate the minions. They freak me out.

Minions are overrated garbage and this tastes like banana frosted cardboard.

My grandson loves this cereal! Too bad you can't find it anywhere!

This was a good tasting cereal. You don't find too many Banana flavored cereals these days on the market. I tasted the banana more than the berry in the cereal, but it was a good change up from the rest of the cereals that came out recently. It's similar to Cinnamon Toast Crunch in appearance and texture, but tastes like bananas. Worthy a try before it's pulled from the shelves at your local Walmart.

I cannot find this cereal anywhere. I got it from Walmart, but they never got it back in. So can I order it from someone?

I just love this cereal. It is so very yummy. I like the flavor. :-D