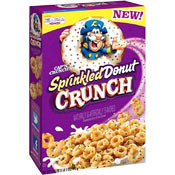 From: Quaker
Introduced in 2014


The compete name of this cereal is Cap'n Crunch's Sprinkled Donut Crunch. The cereal pieces are donut-shaped O's (like chubby Cheerios) with colorful sprinkles on the outside (and in reality, also packed in the holes). The front of the box calls the product a "naturally & artificially flavored sweetened corn & oat cereal."

The official Cap'n Crunch website used the following text to promote the cereal:

"If you think coffee and donuts is a perfect combination, wait until you try milk with our new Cap'n Crunch Sprinkled Donut Crunch! Each irresistible mini donut flavored piece is topped with colorful sprinkles and is packed with the Cap'n's classic CRUNCH."

The first 5 ingredients listed on the side panel are corn flour, sugar, sprinkles, whole grain oat flour and brown sugar. 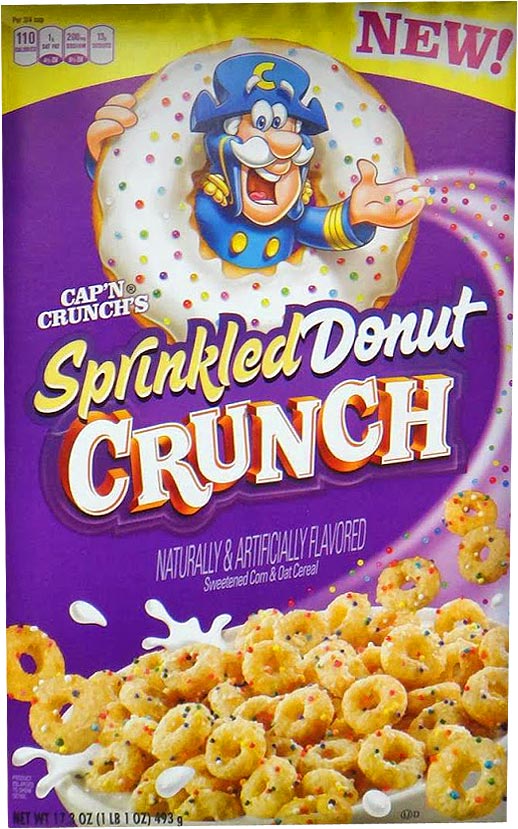 This is the Cap'n's second foray into donut-shaped cereal. In 2003, Quaker introduced Cap'n Crunch's Choco Donuts.

Company Description: The Quaker Oats Company was founded in 1901 with the merger of three oat milling operations in the Mid-Western United States. Since then, the company has expanded operations to include a number of grocery sectors. In addition to hot and cold breakfast cereals, their products include... Read on and see all cereals from Quaker
This cereal belongs to the following Mr Breakfast Cereal Families:
Upload an image for this cereal
Comments About This Cereal
What do you think of Sprinkled Donut Crunch?

Oh man, this cereal is good. It's very sweet, but also DELICIOUS! This stuff tastes like what cereals USED to taste like back in the 80s! Oh yeah! It's like the 80's in a box. Reminds me of Dunkin' Donuts vanilla flavored cereal. The texture is like Honey Graham OH's (super crunchy). Also, it turns your milk purple.

How can I order this. My son wants it and I can't find it anywhere.

I first found this cereal when I recently went to Texas. I'm the guy who stands in the cereal aisle for 15 minutes hoping that they bring back retro cereals from the 80's and 90's, or have some new well thought of cereal to offer the variety I grew up with! So when I'm out of town at a market the first place I go is the cereal aisle. What do I find? SPRINKLED DOUGHNUT CRUNCH! Fell in love with the taste, and the box was gone in no time! I sent pics to my friends and family they wanted to try it back home in Baltimore. I've been back home for two months and finally! We have it at a Walmart up the street now! I almost cleared the whole shelf. Please Cap'n don't take this from us! Thank you for giving us back our Oops All Berries and for what appears to be a permanent return! This too deserves to become a official member of the Crunch family!

The first time I tasted this cereal, I thought that it tasted terrible. After a couple of bites, I realized that it wasn't the cereal. My milk had gone sour a full week before the expiration date! Yuck! It tasted much better with fresh milk but I would still only rate it as "pretty good".