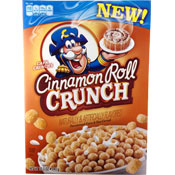 From: Quaker
Introduced in 2012


The full name of this cereal is Cap'n Crunch's Cinnamon Roll Crunch. It's described on the front of the box as a "naturally & artificially flavored sweetened corn & oat cereal."

It's interesting to to note that Quaker came out with a somewhat similar Cap'n Crunch cereal in the early 1970's called Cinnamon Crunch. Although that cereal had pieces shaped like deflated round pillows compared to the ball or nugget shaped pieces in this newer offering. 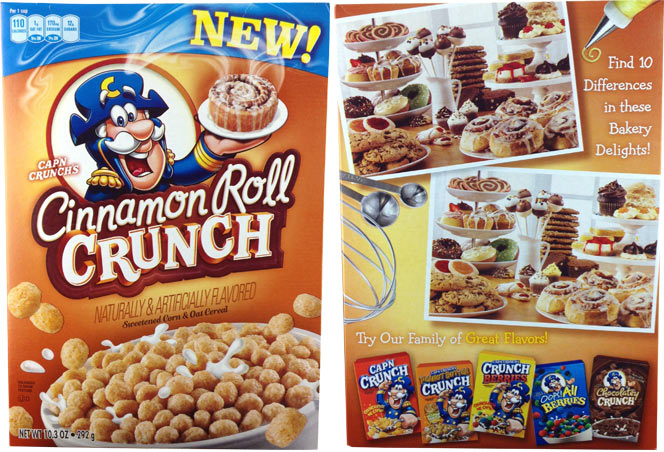 Cinnamon Roll Crunch Cereal has been reviewed on MrBreakfast.com.

Click here to read the review.
This cereal belongs to the following Mr Breakfast Cereal Families:
Upload an image for this cereal
Comments About This Cereal
What do you think of Cinnamon Roll Crunch?

I think it takes like a sugary, cinnamon bun. A nice change of pace for the Cap'n.

I enjoyed this cereal. Just a sweet, cinnamon taste and a light crunch. It goes down easy.

This stuff is absolutely nasty. it reminded me of butter-flavored Crisco with a slightly cinnamony chemical aftertaste.

Looks and tastes like a cinnamon version of the Peanut Butter Crunch. As a ol' fan of Jean LaFoote's Cinnamon Crunch, I'm glad that Quaker and the Cap'n released this cereal!