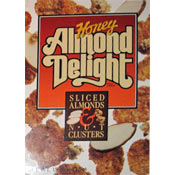 
This was a flaked cereal with sliced almonds and nut clusters. It appears to have been the same cereal as Original Almond Delight, except for the addition of honey which wasn't in original cereal's ingredient list.

We know the cereal existed in 1993, but we haven't narrowed that down to the year it was introduced. It's unclear if this cereal was an extension of the Almond Delight brand or if the original cereal transitioned into this cereal. If you have any information, please post a note below.

Upload an image for this cereal
Comments About This Cereal
What do you think of Honey Almond Delight?

I loved this cereal! So sad it was discontinued, why? Anyone know? I'm doing Great Grains now, but it's not as good.

Does this cereal still exist?

I still search for this cereal today. :( I miss this cereal. And like many others, Almond Delight is still my all time favorite cereal too.

It was good, but the original Almond Delight was - and still is - my all time favorite cereal.