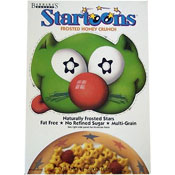 From: Barbara's Bakery
Introduced in 1993


The complete name of this cereal was Startoons Frosted Honey Crunch. The front of the cereal box described the cereal as "Naturally Frosted Stars - Fat Free - No Refined Sugar - Multi-Grain."

The star-shaped cereal pieces with holes in the center looked very much like General Mills' Sprinkle Spangles Cereal (also introduced in 1993) and Kellogg's All Stars Cereal (introduced around 1963).

The front of at least one box featured a cut-out mask of a crazy green cat-like creature with a big red clown nose and star for eyes (which resembled the cereal pieces).

Upload an image for this cereal
Comments About This Cereal
What do you think of Startoons?
By cosey

Where can I buy Startoons?