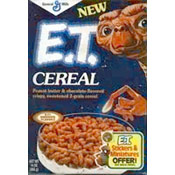 
As the box stated, E.T. Cereal was a "peanut butter and chocolate-flavored crispy, sweetened 2-grain cereal". The cereal pieces came in the shapes of the capital letters "E" and "T".

The flavor of the cereal was said to be similar to that of Reese's Puffs (originally Reese's Peanut Butter Puffs) . This may have been intentional as the character of E.T. in the 1982 Steven Spielberg film was shown eating Reese's Pieces peanut butter candy.

Television commercials for the cereal used the tag line "A glowing part of (a) good breakfast" - a reference to the alien character's glowing finger, as seen in the movie and on the cereal box.


E.T. Associations With Other Cereals:

As a tie-in for the 20th Anniversary Edition of the E.T. film, the Post cereal company provided Free 10 Minute Phone Cards - a promotional play on the movie's famous line "E.T. phone home". 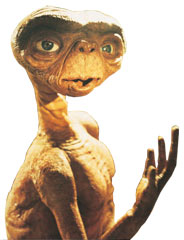 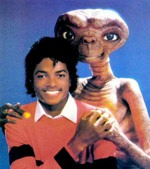 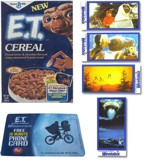 Submitter: Mr Breakfast
Uploaded: 3/13/2008
Additional details
Upload an image for this cereal
Comments About This Cereal
What do you think of E.T.?

I wish this cereal would come back sooo bad!

Aldi has a peanut butter chocolate Cheerios knock off that tastes exactly the way I remember E.T. Cereal tasting. Even after 30+ years it's uncanny!

Very cool. Never knew it existed. Would have liked to try it. Sounds tasty.

Back when it came out, it was the only chocolate and peanut butter cereal I'd encountered, and I don't remember another one until many years later. I wasn't exactly the biggest fan of movie E.T., despite my mother deciding I needed the bedspread with matching curtains... but the cereal tasted better than I had expected of the ugly little guy on the box.

The best chocolate cereal. The best peanut butter cereal. A recipe from the Cereal Gods!

I wrote a letter to General Mills when I couldn't find it on the store shelves but I haven't heard back from them. I think the E.T. Cereal was great. Maybe if there is a remake of the E.T. movie, they'll bring it back.

It was sure better than the E.T. game we had.

I have to agree with most comments. It's really the best tasting cereal I've ever had. It was similar to Reese's but slightly more peanuty and not as sweet. A perfect blend. I wish the companies would be smart enough to bring back the same taste.