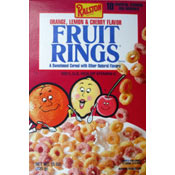 
This cereal was described on the front of the box as "a sweetened cereal with other natural flavors." Other text on the box included "orange, lemon and cherry flavor" and "100% U.S. RDA of Vitamin C". The cereal looked remarkably similar to Kellogg's Froot Loops.

The Fruit Rings mascots were an orange, a lemon and cherry. It could be interpreted that the orange was the father, the lemon was a mother and the cherry was a child. Although this assumption is probably incorrect as every one knows when an orange marries a lemon they do not produce cherries.

Upload an image for this cereal
Comments About This Cereal
What do you think of Fruit Rings?

Regarding the statement that 'when an orange marries a lemon they do not produce cherries'... Perhaps the Cherry was an adopted child? Seems plausible to me.