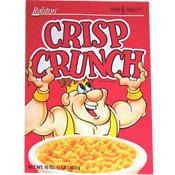 
This cereal was described on the front of the box simply as "a sweetened cereal". The cereal's original mascot was a character named Chris, as indicated by the name sewn on to the front of his marching band-style hat.

A later incarnation of the cereal box showed a new mascot - a sort of meatball jock character with a headband and wrist bands. 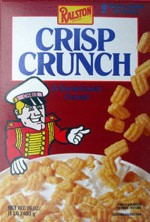 Submitter: Mr Breakfast
Uploaded: 9/18/2009
Additional details
Upload an image for this cereal
Comments About This Cereal
What do you think of Crisp Crunch?

It was a rip off of Cap'n Crunch that wasn't as good.

This cereal, I believe, was a Cap'n Crunch "copycat".