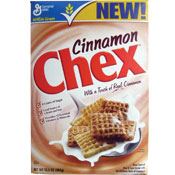 
This cereal was described on the front of original box as an "oven toasted rice & corn cereal with the delicious taste of cinnamon."

The text from the back of the original box read as follows:

"Simply delicious with whole grain goodness and a delicious touch of real cinnamon.

"Did you know that 9 out of 10 Americans aren't getting enough whole grain? Cinnamon Chex cereal makes it easy to start your day the whole grain way! Whole grain provides plant nutrients, antioxidants, vitamins, minerals and fiber that work together to help keep you healthy. With an irresistible flavor and a hearty crunch, Cinnamon Chex is a (unable to read word) way to get more whole grain in your diet!"

Cinnamon Chex Cereal has been reviewed on MrBreakfast.com. 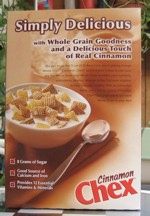 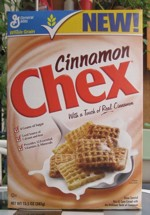 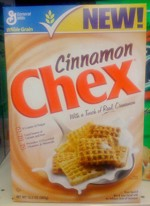 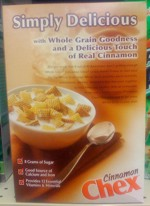 Submitter: Mr Breakfast
Uploaded: 4/26/2009
Additional details
Upload an image for this cereal
Comments About This Cereal
What do you think of Cinnamon Chex?

Tried this for the first time and it ROCKS. It's now my favorite of all the Chex cereals.