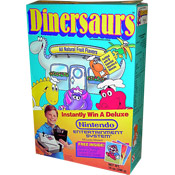 A fruit-flavored dinosaur-shaped cereal with six friendly dinosaurs on the box - five in chef's hats and one poor guy - who still managed to flash a smile - whose body was hollowed-out and converted into a diner.

The jingle for the cereal, as heard in the only known TV ad, went "Nothing is finer than breakfast at the dinosaur diner (Dinersaurs!) / Tiny dinosaurs like you never saw before - Fruity Dinersaurs!"

Known Premiums: Dinosaurs Trading Cards on back of box; 3-D Glasses inside box to view 3-D image on back of box; collectible New Ghostbusters Movie Mystery Record inside the box; Sweepstakes to win a Nintendo Entertainment System; Sweepstakes to win a family trip to Walt Disney World; a chance to win a real Porsche; and a chance to "Instantly Win a Real Fossilized Dinosaur Bone!"

Dinersaurs Cereal lasted about 2 years before it was discontinued. 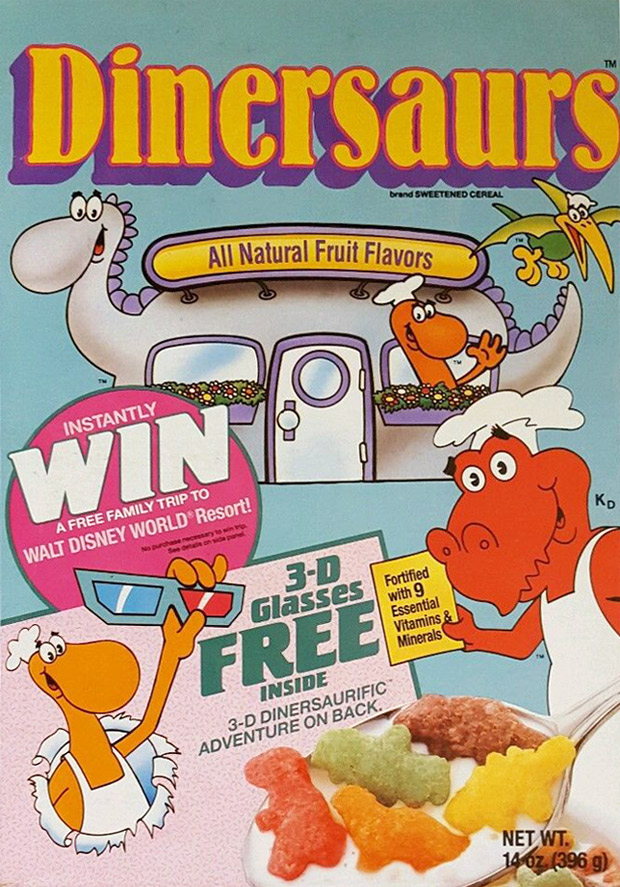 Submitter: jeffrey
Uploaded: 10/10/2010
Additional details
Upload an image for this cereal
Comments About This Cereal
What do you think of Dinersaurs?

View all 19 comments for this cereal.

I just loved them.

I know I'm five years late on this but nobody is acknowledging the presence of an actual cereal creator here. I for one would like to thank her for this delicious product and ask if she has created any other cereals or snacks or anything. Ann Wilson should be a cereal celebrity and given recognition for what she's given us. Thank you!

Hello. Was wondering if there was any info on who won the 1988 contest to win a Porsche from the back of the box of this cereal?

Fruit Islands Cereal remains my Rosebud, but I remember this cereal quite well - it had very strong flavor, and it is another top-tier, long-lost breakfast cereal from that heyday of the mid- to late-80s. Very good work. Especially by that hollowed-out dinosaur who serves as the diner itself. They should have made another cereal spin-off consisting of his viscera. It could have been called DinoChitterlings and have the consistency of 3-day-old milky Fruity Pebbles.

Are there any cereals out there that compare or taste similar to Dinersaurs?

This was one of the coolest cereals on the market. I still have a major crush on Sara-Triceratops, the girl triceratops dino waitress. Cool that you had Denver, the last Dinosaur on the box.

Hi! My name is Ann Wilson (Breker). I am the creator of Dinersaurs cereal. My ex-husband and I had applied for a trademark for Dinersaurs cereal and sold it to Ralston. In turn, they sold our contract to GMeals. The product only stayed on the market a year and half! My original idea was to have Trex on the front of the box and a chocolate cereal for the product! But it all turned out good!

I can actually almost taste this cereal when I think about it. It was my all-time fave!

Some of my earliest childhood taste memories are of this cereal.

Loved this stuff. Snuck it all the time. After I was sick of Nerds cereal for a day or so of course.

View all 19 comments for this cereal.