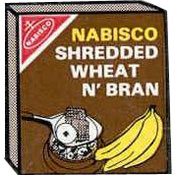 
This cereal was made by Nabisco until 1993, when Nabisco sold their Shredded Wheat line of cereals to Kraft Foods. Kraft's Post division began selling their brand of Shredded Wheat 'N Bran shortly after.

A 1986 television commercial for the cereal showed a man pouring a bowl of his regular bran flakes. The man is surprised and dismayed as sugar comes out of the box instead of cereal. This was the voice-over for that ad:

"Hey, you're eating bran cereal because it's good for you right? Well, guess what's in it besides bran. Sugar. Up to 22 added teaspoons a box. Over a period of time, that can really add up. Man up! But Nabisco Shredded Wheat 'N Bran is different. It's the only leading high fiber cereal without a grain of added sugar in it... or even salt. Nabisco Shredded Wheat 'N Bran. If you're eating bran because it's good for you, why add sugar and salt?"

Company Description: Nabisco's history dates back to 1898 when three bakery conglomerates merged to form The National Biscuit Company - comprised of 114 bakeries. In 1901, The National Biscuit Company introduced the Nabisco Cracker. It wasn't until 1971 that the company changed it's name to Nabisco... Read on and see all cereals from Nabisco
This cereal belongs to the following Mr Breakfast Cereal Families:
Shredded Wheat 'N Bran (Nabisco) Cereal Theater

When Shredded Wheat went from Nabisco to Post, they claimed the recipe did not change, but it definitely tasted different. I started eating Shredded Wheat 'n Bran instead of regular shredded wheat because I wasn't as used to it so the difference in taste didn't throw me.

I too am looking for this cereal in Ontario, Canada. Please leave me a message here with the names of stores that sell Shredded Wheat N' Bran in southern Ontario, within 120 miles from Toronto. Thank you.

Shredded Wheat is the best of all cereals in my opinion. Completely pure and natural. Post brand Shredded Wheat 'n Bran is my favorite. I also love Publix brand raisin bran. I can't tell the difference from Post.

I'm from Canada, and I cannot find this cereal anywhere right now. My Husband loves this cereal and would like to buy it again. Would you please email me back as to what stores in Ontario (near Newmarket, Ontario) carry this cereal. Thank you!