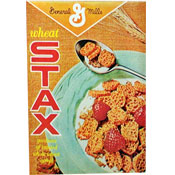 From: General Mills
Introduced in 1966


Wheat Stax cereal, often just referred to as Stax cereal, was made up of flat, near-square pieces that resembled misshapen Honeycomb pieces with lots of nooks and crannies.

The cereal was referred to in ads as "the cereal for adults". One of the cereal's tag lines went something like, "Stax, the cereal that is toasted in places where other cereals don't have places!"

We know that the following actions occurred in various Stax commercials:

A magazine ad for Wheat Stax had the following text:

Now there's a cereal you can stack

Once you stop snacking and start eating you'll find there's more to STAX than stacking. New Wheat Stax really taste good. They're bite-sized chunks of toasted whole wheat. Cruncher because they're toasted on the bottom, top, sides - even inside. They're the toastiest, tastiest, crunchiest, stackiest cereal you've ever tasted.

Submitter: Heather_S
Uploaded: 3/23/2009
Additional details
Upload an image for this cereal
Comments About This Cereal
What do you think of Wheat Stax?

View all 65 comments for this cereal.

#1 Worst was 'Stax'. They were an unknown combination of wheat and I'm guessing epoxy. They could actually be stacked, and even after 30 min in milk they could not be crushed with a spoon. After eating a bowl of them you would find that your gums and cheeks were scratched and bleeding.

I've always wondered why they took such a good cereal off the market.

I remember Marty Ingels doing the commercials and stacking the cereal. So naturally we begged Dad to buy it. He did. We stacked the cereal. But I thought it was just as lame as Wheaties -- or worse.

One of my favorite cereals when it was on the market. 'Stax are for eating, not stacking!' Wish they still made it!

I loved this cereal as a kid. I know I'd still love it today - add my vote for General Mills bringing it back!

Absolutely my favorite all-time cereal... wish General Mills would bring it back... nothing in the past or present compares to it.

Like many of the commenters below, I loved it as a kid, even though it was 'made for adults.' I was one of the oddball kids that didn't care if a cereal didn't have a lot of sugar in it, so naturally, I was very bummed when it was discontinued.

I have forgiven them for no longer making Stax; but I won't buy anything else from General Mills.

Wish I could still get this.

This was great stuff! Take heed General Mills and bring it back!

View all 65 comments for this cereal.