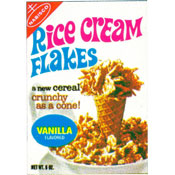 From: Nabisco
Introduced in 1968

The test-market box for Rice Cream Flakes described the product as "a new cereal crunchy as a cone!". There was a vanilla variety, a chocolate variety and a strawberry variety. We suspect that cereal also came in an orange flavor, but we've been unable to uncover visual proof. If you have any additional information, please post it below. 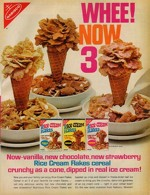 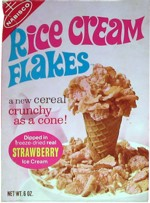 Submitter: DeeJay
Uploaded: 3/24/2010
Additional details
Upload an image for this cereal
Comments About This Cereal
What do you think of Rice Cream Flakes?

I remember getting this cereal in a little general market in Roscoe, NY when I was a kid. We all loved it, and were disappointed that it never hit the market in NJ where we lived. I have often wondered if I really remembered it correctly, until I saw this page. Thanks for the memory!

The best cereal EVER. I remember it kept going up in price, and the box was literally only half full. When my mother saw that, she refused to buy it any more. I wish they'd bring it back, now that I'm in control of groceries! It was just amazingly good.

Greatest cereal ever. It was only available for a short time when I was a kid. It was expensive and came in tiny 6 ounce boxes. Wish it was around today.

I remember this from the 60's. It was great. I wish it was available again

Awesome. Bring this cereal back to grocery stores in NY and I'll try it.

Didn't they have a commercial that went "I scream for RICE CREAM FLAKES" and then "I scream, you scream, we all scream for ice cream!"? I remember singing the jingle as a kid... and it sure made me want the cereal!

I was in the national commercial produced for this cereal, and I recall it tasted great (what kid wouldn't eat ice cream for breakfast?). Alas, as written above, it never launched nationally and neither did the ad campaign!

I wanna try it too. I voted for just because it's seems like a really great idea. Come on cereal companies... bring back this concept!

Wow, I really wish I could have tried this. Why don't they make it again? Seems like with new technology that freeze-dried ice cream should be a lot easier to come by now. Wishful thinking.

I had this as a kid. Best cereal I ever had!