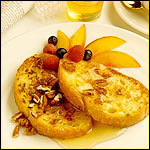 Recipe and photo courtesy of the National Honey Board.

Honey Trivia: With an ounce of honey, a bee can fly around the world.

A touch of honey and a pinch of cinnamon add flavor and a fresh wholesome sweetness to this French toast recipe.

Mr Breakfast would like to thank SweetHoney for this recipe.


Comments About This Recipe
What do you think of Honey Custard French Toast?
Overall Average Rating = 5 (out of 5)
Based on 2 votes.

From Jen111
I made it with whole wheat bread. Tasty!

From dianne (Team Breakfast Member)
I use half and half instead of milk for all my French toast recipe. Also, if you pop the fried pieces in the oven (like 250 degrees) for 10 minutes, the insides cook more and everything is better.