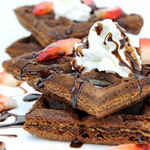 (5 servings)    Printable Version
I suppose the biggest criteria for testing this waffle would be "does it really taste like a brownie?" The answer is YES! It's chocolaty and delicious. You get extra bursts of chocolate from the chocolate chips and the nuts make it seem more like a brownie waffle as opposed to a regular chocolate waffle. The best waffles from this recipe were the ones that were just slightly overdone. Those felt the most like brownies because of the texture difference between the crisp edges and the softer interior. Bottom Line: If you like brownies and you like waffles, you're gonna like these brownie waffles. (This recipe was submitted in 2003. It was tested and photographed in November 2016.) 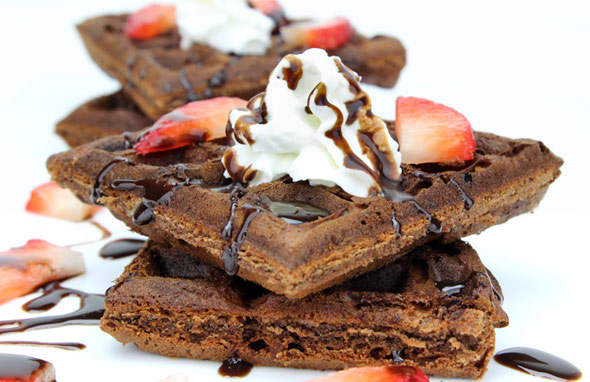 How To Make Chocolate Brownie Waffles

In a medium-sized mixing bowl, sift together the pancake mix, walnuts, chocolate chips, cocoa and sugar.

In a separate bowl, beat the egg and stir in the oil and water.

Pour desired amount of batter into well greased waffle iron. Bake until indicator light goes off or until the steam stops. 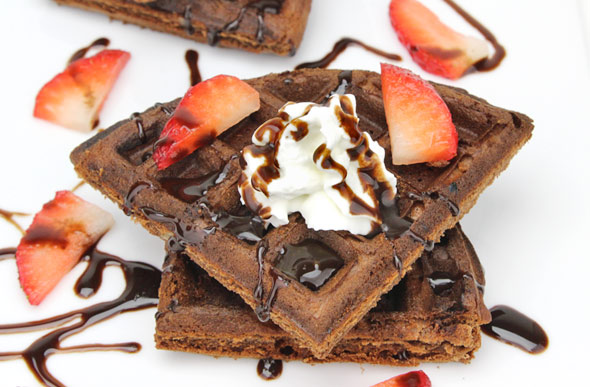 For my recipe test I used a round Chef's Choice WafflePro Waffle Maker which uses 1/2 cup of batter for each waffle. I was able to get 5 waffles with just a little bit of batter left over.

Expect this batter to be thicker than you may be used to. It will resemble actual brownie batter. 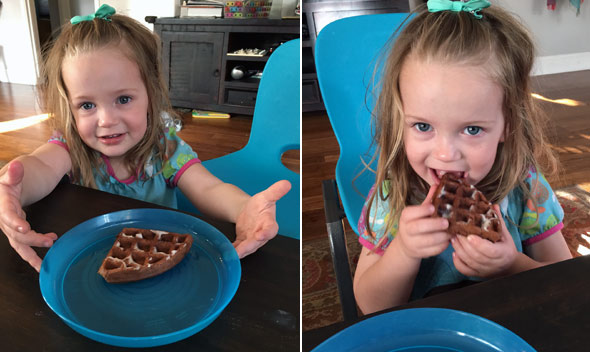 What could be better than this! Top with a little whipped cream and a big strawberry for the perfect extra flare.

Mr Breakfast would like to thank ChocolateLover for this recipe.


Comments About This Recipe
What do you think of Chocolate Brownie Waffles?
Overall Average Rating = 5 (out of 5)
Based on 8 votes.

From JennaDaze
So good! We loved them.

From hawkboy
Made it into waffles, as aundream said Awesome Recipe!!!! =D

From aundream (Team Breakfast Member)
LOVED this recipe. We forgot to grease the waffle maker so it stuck horribly to it. We then decided to try to make it into pancakes instead. It worked beautifully. We used a multi-grain all purpose baking mix instead of the pancake mix... and when they were done we buttered them and sprinkled with powdered sugar. We WILL be making these again!

Looking for a different recipe. This one seems weird. I think you should make pancake batter as directed and then add a little more baking powder and maybe just a tablespoon more of oil.

From Trouble
This recipe wouldn't rise - and we tried it in both the waffle maker & as pancakes... the water made the batter too runny. I added an egg & some more mix & salvaged what was left.

Yum yum in my tum tum!

From pumpkinpie
Fantastic! Great with raspberries.