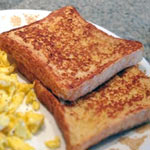 (6 servings)    Printable Version
This recipes makes 6 servings*. Each serving is made up of one piece of French toast.

In a blender, combine the cottage cheese, egg substitute and cinnamon and pulse to puree.

Pour the liquid mixture into a large shallow bowl. Soak each bread slice thoroughly in the mixture.

Fry on a griddle or in a fry pan coated with canola cooking spray - heated to medium-high heat. Cook each side to golden brown.

Serve with diced fresh fruit as a topping.

Each serving of this French toast has 134 calories, 1 gram of fat, 15 grams of carbs and 16 grams of protein.

* If using regular bread slices, you can probably get 10 servings with the amount of egg mixture. If your bread isn't already sweet like a cinnamon bread, add 2 teaspoons sugar or sugar substitute in with the blender ingredients.

Easy four-ingredient French toast where the egg coating mixture is prepared in a blender. Makes 6 to 10 pieces depending on the size and thickness of your bread.

Mr Breakfast would like to thank starr for this recipe.


Comments About This Recipe
What do you think of Protein-Packed French Toast?
Overall Average Rating = 4 (out of 5)
Based on 2 votes.

From Amber
I used 8 oz of cottage chees, 1/4 cup skim milk, cinnamon, a pinch of salt, a nice amount of vanilla extract and I sqeezed a tablespoon of juice from an orange. I used Trader Joes 8 grain bread and this was the best French Toast I have ever tasted!

From Martulka
I used only half of container of whipped cottage cheese and 4 eggs, added little bit of Stevia and cinnamon. Had about 8 slices of challa bread. It was delicious, and more protein in my French toast. Yam. We dressed it up with berry sauce and maple syrup with yogurt whipped cream, or chocolate syrup. It was dellish.

Do you know how many eggs should I use, if I do not want to use substitute? Sounds very good.