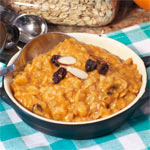 (1 serving)    Printable Version
This oatmeal tastes a little like pumpkin pie. You could get more of a pie flavor experience by adding more sweetener and topping with whipped cream. But as written, this recipe keeps the sugar content fairly low while still bringing a pumpkin pie sensation to mind. It took about 10 minutes to make. Bottom Line: Easy & pleasing, but does taste a bit healthy. (This recipe was submitted in 2008. It was tested and photographed in November 2014.) 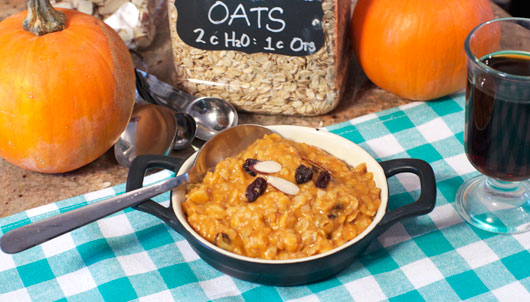 How To Make Pumpkin Pie Oatmeal

In a medium sauce pan over medium heat, bring the milk and water to a gentle boil. Add the oats, reduce heat low and simmer for 8 minutes or until desired consistency is reached.

Transfer to a serving bowl. 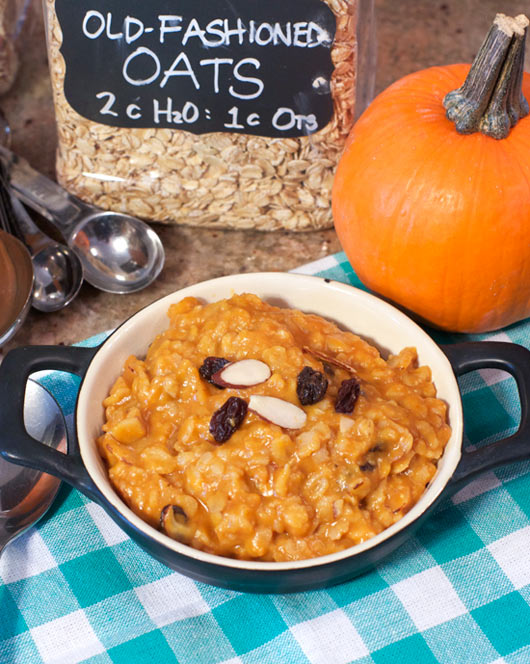 In place of the sliced almonds, also try chopped pecans or walnuts

For a final garnish, sprinkle with a additional brown sugar and chopped nuts.

Instead of cinnamon and nutmeg, you could use a nice-sized pinch of pumpkin pie spice.

This oatmeal is so good when you serve it with a little whipped cream or low fat ice cream on top - just like you'd have on pumpkin pie. Enjoy!

Mr Breakfast would like to thank MSU-Spartans for this recipe.


Comments About This Recipe
What do you think of Pumpkin Pie Oatmeal?
Overall Average Rating = 4 (out of 5)
Based on 2 votes.

From J. Lundgren (Team Breakfast Member)
We made this for Swedish Thanksgiving and it was outstanding! We added more cinnamon, brown sugar, dried cranberries, and extra syrup, but it was a great base recipe.

From dmitry baycharov
You need to add twice as much of everything 'cause this is only like half a serving.