(1 serving)    Printable Version
This recipe was submitted to us by a user named 'Chickapea'. I made it this morning (June 2013) and thought it was great. Based on a couple user comments since it was added to the site, I reduced the maple syrup and honey to 2 teaspoons each. That provided just the right amount of sweetness. The amount of water I used to make my oats was 3/4 cup. The oatmeal tasted vaguely like banana pancakes. Chopped walnuts made a perfect garnish for each serving. 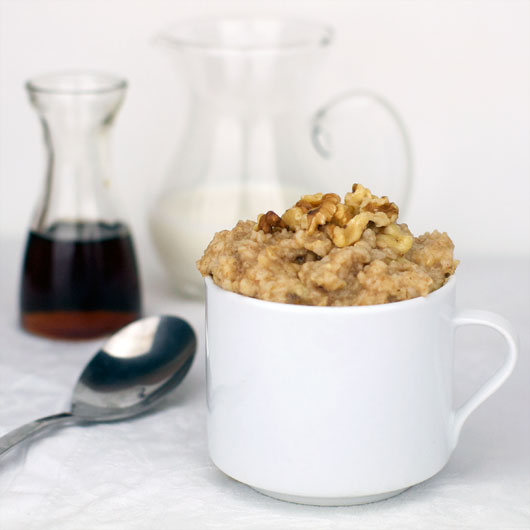 How To Make Pancake Oatmeal

Stir in cinnamon, maple syrup,and the fruit (if using any). Once all the ingredients are together, drizzle the honey on top and enjoy!

I don't really do the measurements on any of the ingredients except for the oats, I do it all to my preferred taste ^-^.

You can also cook the oats with milk instead of water, but I like to add the milk after to cool it down a bit. I also suggest using real maple syrup for this oatmeal.

Mr Breakfast would like to thank Chickapea for this recipe.


Comments About This Recipe
What do you think of Pancake Oatmeal?
Overall Average Rating = 4 (out of 5)
Based on 7 votes.

From Lynn J.
I use flavored yogurt such as berries (yummy) or plain instead of milk. Very good. Thanks!

From Christine
This has become a breakfast staple! I add a tiny dash of salt, use 1 cup of water, and drizzle the honey on top (rather than measuring 1 tablespoon).

From Nat
It didn't taste like pancakes but it was still okay. Next time, I will cook it with apples instead of banana.

From H. Zimmer
I disagree with the guy that said it was too sweet. I put a little more maple syrup on it after I put it in the bowl. I liked it. It was way better than the packets from the store.

This is an awesome oatmeal recipe idea. Love it!

I haven't tried the Pancake Oatmeal recipe yet but it sounds good. Is there a substitute instead of banana. I can't think of what else to use. Thanks. Please email me at mleff2@cox.net with suggestions.

From Bobbi2513
I thought it was way too sweet... I couldn't finish the bowl.

From Perfume Girl
This was really good. Instead of mashing the banana and putting directly in the oats, I sliced it and put it on top which worked great. Also added a spoonful of whipped cream, which of course made it taste even better. Thanks.

From Lancaster
I thought your measurements were fine. My son liked it and he's a picky little kid. Thanks for the recipe.