(1 serving)    Printable Version
Cook oats with milk on stove top according to directions on with the oats. Add cocoa powder, nut butter and sweetener as mix starts to thicken. Once the right consistency is reached, turn off the heat and then stir in the chocolate pieces. 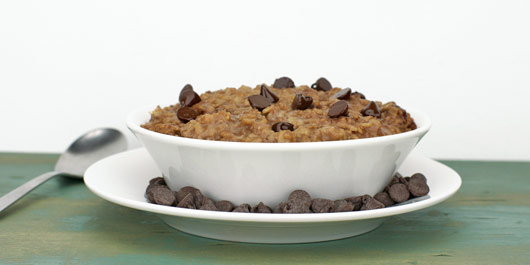 Note From Mr Breakfast:
First, I really want to thank Aleatz for submitting this recipe. I made it this morning (June 2013) and loved it. Instead of peanut butter, I used Nutella. Yum! I also increased the amount of oats to 1/2 cup just because I like my oatmeal a little thicker. If using Old Fashioned oats, you bring the milk to a near boil, add the oats, reduce heat to low and cook for about 6 minutes. I'd make this oatmeal again for sure.

You don't necessarily have to make your oatmeal with 1/3 of oats to 1 cup of milk. I personally do it this way. However, I do recommend using milk in this recipe - it adds a creamy texture.

Mr Breakfast would like to thank Aleatz for this recipe.


Comments About This Recipe
What do you think of Chocolate Chip Oatmeal?
Overall Average Rating = 4 (out of 5)
Based on 8 votes.

From Lysander
This oatmeal is a little confusing to make, but it was worth it!

From Benji
Been trying to eat more oatmeal lately and this was a great recipe. I used Nutella instead of peanut butter and it didn't need anymore sweetener than that.

From Christina
This recipe turned out great! I thought that the peanut butter would take away from the chocolate taste, but that was not the case.

From Yum4MyTum (Team Breakfast Member)
If you use Nutella instead of peanut butter, it's even more chocolatey.

From AJ arnold
When I saw this post, I was eager to try it... but it tasted bad.

From Lazar
My favorite oatmeal recipe ever. I use steel cut oats so it takes a bit longer but it is SO worth it.

From lynie
Soooo much better than instant oatmeal. I'll make it again 4 sure. Tip: At the end, swirl a little strawberry jam in each bowl. Yum!

From Michael A.
Excellent! A keeper for my recipe book. Wow it really filled me up.