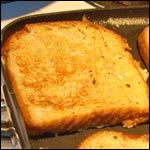 (1 serving)    Printable Version
Stir everything together in a flat dish (not the bread!). Soak bread for about 2 minutes on each side.

Fry on griddle (using non-stick spray) until nicely browned on both sides, about 4-5 minutes.

I'm a 'cinnaholic', so I LOVE French toast! Here's a recipe I made last night using just an egg white - it tastes great! Serve with warmed applesauce and/or fresh strawberries.

Mr Breakfast would like to thank Nashta for this recipe.


Comments About This Recipe
What do you think of Almost Fat Free French Toast?
Overall Average Rating = 5 (out of 5)
Based on 9 votes.

From Maria DD
I used 2 egg whites and 3 Tablespoons of milk and it worked great.

From Fizzy
I added a couple more tablespoons of milk, but other than that, this was great. The warm apple sauce is great topping. I'll use that again on pancakes too. Nice idea.

From SuperGood
Delicious, low fat, and makes for a very special breakfast - what more could I ask for? :)

From Amandas Mom
My daughter made this for me this morning. She knows I am on a very low fat diet. She used non fat milk and Sour dough bread with 0grams of fat per slice. Topped it with Fat free butter flavor syrup. Yummm. It is now my favorite french toast recipe!!!

From uncle_desayuno
It tastes pretty good as is, but leaving out the nutmeg and cloves makes it taste incredible!

From cook4friends
It's really good, but I wouldn't soak the bread for 2 minutes. I would try 10-30 seconds. I soaked the first piece for a minute and it soaked up most of the mixture.

From tarahart (Team Breakfast Member)
I would make this again! Served with turkey bacon! It's very good.

When you say egg white... its only the white not yellow stuff right?

From h2cro4 (Team Breakfast Member)
Delicious! Great recipe for healthy French toast. Next time I think I will double the amount of ingredients, but still only use 2 slices of bread.