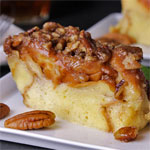 (6 servings)    Printable Version
This French toast was insanely good. I served it at a brunch with 7 guests. I made everything the night before - refrigerating the soaking bread and leaving the prepared praline topping on the counter. Then in the morning, I spread on the topping and baked it. Easy as pie! I knew the topping would get complements. Just look at the ingredients. But the body of the French toast got just as much praise. It was terrifically moist and custardy, but cooked through enough to remind one person of bread pudding. I absolutely recommend this recipe. I know I'll be making it again many times. (This recipe was submitted in 2007. It was tested and photographed in August 2016) 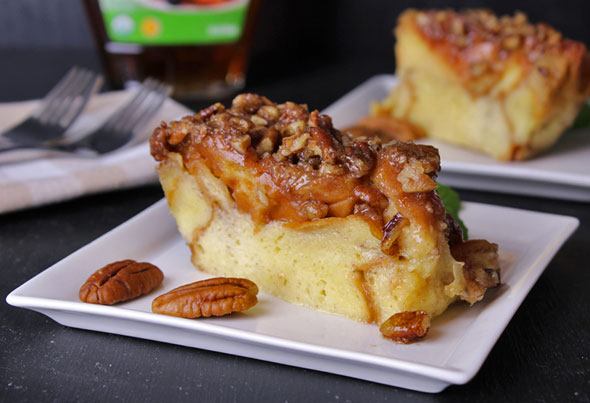 How To Make A Baked French Toast Casserole

Slice the bread into twenty 1-inch slices. Arrange slices in a generously buttered 9x13-inch baking dish in 2 rows, overlapping the slices if necessary.

In a large bowl, beat the eggs and then whisk in the milk, cream, sugar, vanilla, cinnamon, nutmeg and salt. Mix until blended but not too bubbly.

Pour mixture over the bread slices, making sure all slices are covered evenly. Spoon some of the mixture in between the slices. Cover with foil or plastic wrap and refrigerate overnight.

The next morning... preheat oven to 350 degrees F and prepare the Praline Topping.

For the Praline Topping:

Combine all topping ingredients in a medium bowl and blend well. Spread topping evenly over the bread and bake for 40 minutes, until puffed and lightly golden.

Serve with maple syrup. For a fancy touch, top with sliced berries and whipped cream! 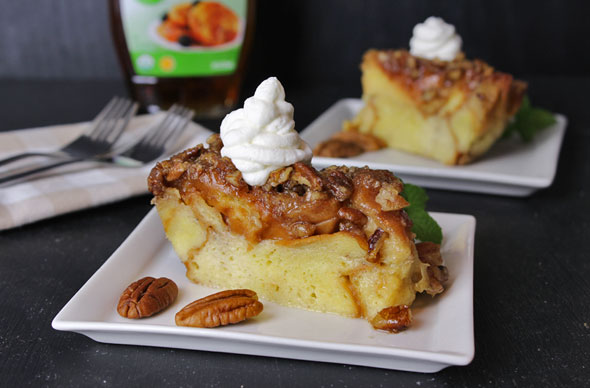 For the bread, I opted for Challah. It cost a little more, but I couldn't have been more happy with the results.

To serve, I made a homemade amaretto whipped cream by beating heavy cream with a bit of powdered sugar and then mixing in some almond extract. I had maple syrup standing by, but everyone though the French toast was already wonderful without it. 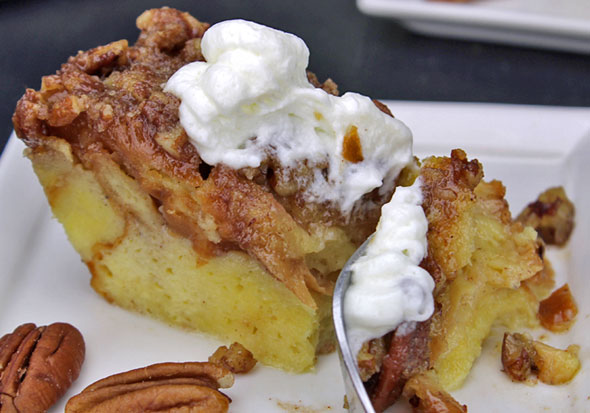 An AMAZING weekend breakfast for the whole family that's ready by the time you're out of the shower!


Comments About This Recipe
What do you think of Baked French Toast Casserole?
Overall Average Rating = 5 (out of 5)
Based on 7 votes.

From johnny1 (Team Breakfast Member)
This has become one of our Christmas traditions when we have breakfast on Christmas morning! Thank you for sharing! :-)

From Kate
I added peaches and chunks of cream cheese. Absolutely delicious!

From ramanda
That topping is out of this world. I lightly toasted the pecans pieces first. I don't know if it made a big difference, but the casserole turned out really good. I'd eat that praline topping on a shoe, it's so good.

From florida
Made this for Christmas morning brunch and it was a BIG hit! I baked sliced apples on top of mine and didn't use the pecans and it was d-e-l-i-s-h!!! The warm maple syrup and whipped topping... yummmmm! Forgot to mention that I made mine the night before and then put in the oven Christmas morning.

From TB
Perfect for weekend guests or Christmas morning.

From Bab
My daughter makes it all the time so now I am trying it - hope mine is as good as hers - I love it.

From sticky
I made this for Christmas. They all thought it was a sticky bun. It was a big hit. It is very easy, and has a great taste.