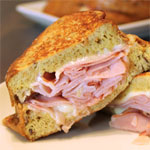 (3 servings)    Printable Version
The beauty of this French toast is how the the savory flavors of the ham and cheese intermingle with maple syrup. I kept a ramekin of syrup on hand and dipped my French toast into it as I ate. Those unfamiliar with kind of dish might find the notion of cheese and maple syrup disturbing. Put aside aside that prejudice and give it a try. It's really, really good. My French bread loaf was fairly large and I was able to get the 6 2-inch slices from 2/3 of the loaf. I also placed the completed French toast in a 275 degree oven for about 10 minutes before serving. It gave me time to prep the table, but also assured that the French toast was cooked thoroughly. Final Verdict: You can stuff me with this stuffed French toast anytime. (This recipe was submitted in 2005. It was tested and photographed in February 2015.) 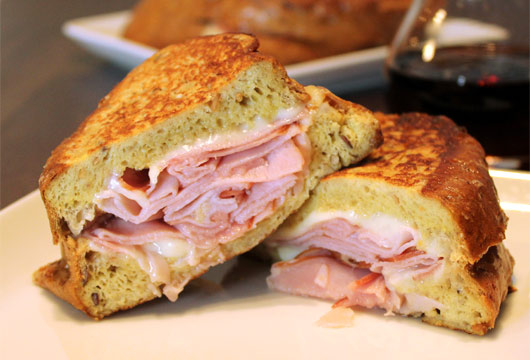 Then, cut each slice 3/4 of the way through from the bottom.

Stuff each slit piece of bread with equal amounts of cheese and ham. (You're basically making sandwiches. It's just that the bread is stuck together at one end.)

Whisk the egg and milk together. Dip each piece of bread in the egg mixture - coating both sides completely.

Melt about 2 Tablespoons of butter in a large frying pan or skillet over medium heat. Fry each side until golden brown (about 5 minutes for the first side and 4 minutes for the second side).

Dust with icing sugar and serve with maple syrup. 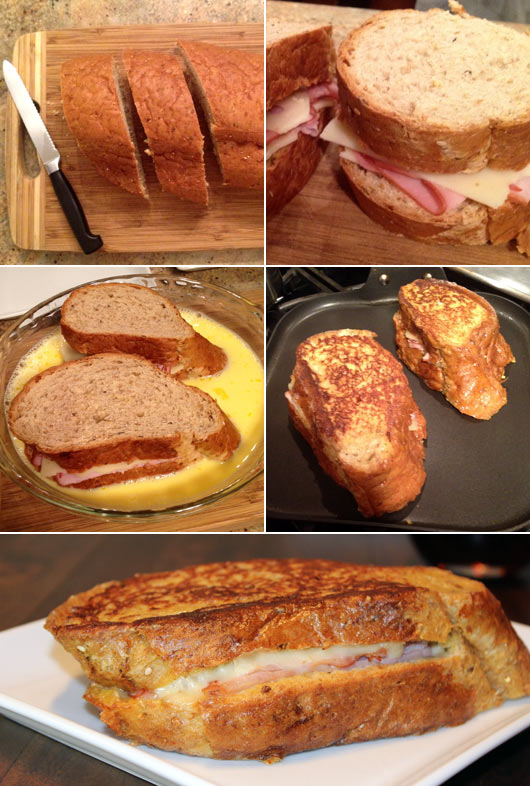 The amount of egg and milk mixture may seem like too much, but it's not if you let the bread soak thoroughly. I transfer the egg mixture to a shallow pie pan and place the assembled "sandwiches" in the pan. After 2 minutes, I turn the sandwiches and let them set another 2 minutes. Most of the egg mixture gets absorbed by the bread. 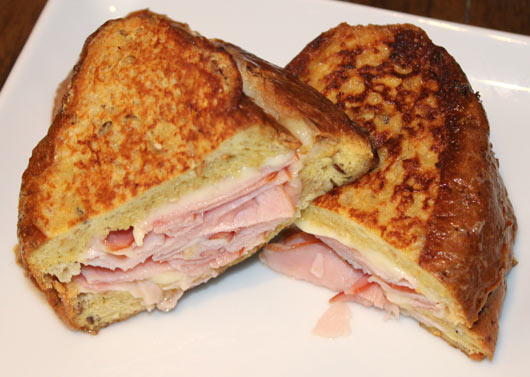 If you don't like mixing sweet and savory, this is wonderful with no topping at all. But for the full experience, use maple syrup and the icing sugar for a breakfast taste explosion.

Mr Breakfast would like to thank mrpotatohead for this recipe.


Comments About This Recipe
What do you think of Ham & Swiss Stuffed French Toast?
Overall Average Rating = 5 (out of 5)
Based on 3 votes.

So you made a Monte Cristo sandwich with ham instead of turkey... might as well go all the way and add the raspberry jam and powdered sugar.

From anniegirl (Team Breakfast Member)
I used a multi grain bread and added some scrabbled eggs with chopped bell peppers. I imagine you could chop the ham but I thought it was pretty interesting with the ham slice underneath the eggs and the swiss melted over the whole bundle. I make this at our cabin on work weekends. Serve with a bowl of mixed fresh organic berries and steaming coffee. All are happpy and satisfied for hours.

From radostina (Team Breakfast Member)
A few years ago, when I used to live in Maine, I tried this breakfast in a small family restaurant, and have been hooked on it ever since. No matter how often I had it, I simply loved it! Tried to make it at home a few times, and although it didn't turn out quite the same as in the restaurant, it was still delicious. By all means, give it a try!

From miausmama (Team Breakfast Member)
This delicious concept is served at a nearby diner. At first, ham and cheese in french toast sounded wierd, but the end result is yummy, yummy!