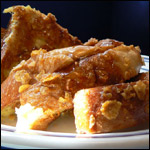 Dip each bread slice into egg mixture and then dip into corn flake crumbs. Cook in buttered skillet until both sides are golden brown. Cut French Toast into diagonals and serve with your favorite syrup.

This is basically plain French Toast coated with corn flake crumbs (or you favorite cereal).


Comments About This Recipe
What do you think of Crunchy French Toast?
Overall Average Rating = 5 (out of 5)
Based on 10 votes.

From Ellen
Made it several times. I also use Rice Krispies sometimes for a different kind of crispy. They are equally enjoyable.

From Nat(alie)
Just made it with cinnamon swirl bread and crushed Honey Bunches of Oats. Did half the recipe for 2 people. Very happy with results. - Nat(alie)

From SurfinBird
This is the only way I make French Toast anymore. Use regular corn flakes. Frosted Flakes sound fun, but they make it too sweet. This is an awesome recipe.

From H. Almond
I used 3/4 cup of milk and it turned out great! I will definitely be cooking this again.

From wentworth
Waaaaay too much milk. And it was hard to get the corn flakes to stick. Good taste though.

From P.H.
Love it. Not really crunchy. But a great texture. I did use a 1/2 cup less milk as mentioned in comments. Turned out great.

From VK
I use whole wheat, multi-grain bread with sunflower seeds in it, and coated with Special K. For a lower-cal version, I omitted the butter and syrup and instead used extra virgin olive oil to cook, and topped with fresh strawberries and blueberries instead of syrup. Amazing!!!

From Isabelle
A really good recipe but it got a bit sickly after a while.

From Stephanie
I had a similar french toast at a great restraunt in Seattle and I'm glad I was able to duplicate it!

From Jan
We used Trader Joe's raisin bread and followed recipe exactly as shown. It was delicious. A definite keeper!!