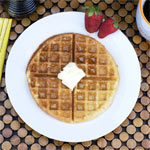 Mix together the flour, baking powder, baking soda and salt.

In a separate bowl, stir together the buttermilk, oil, eggs and optional vanilla.

Add wet ingredients to dry ingredients and whisk until just mixed and moistened. Try not to over-mix.

Prepare according to waffle maker's directions and your done. 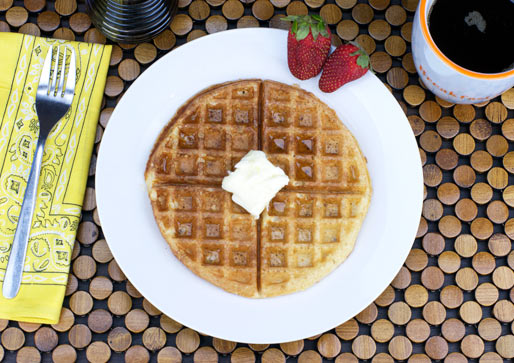 If making sweet waffles, add a Tablespoon of sugar to the dry ingredients. Omit if making savory waffles.

Mr Breakfast would like to thank BreakfastMaster for this recipe.


Comments About This Recipe
What do you think of Buttermilk Waffles?
Overall Average Rating = 4 (out of 5)
Based on 37 votes.

View all 40 comments for this recipe.

From Bob Seven
Hi. This was yummy!

From Josie_M (Team Breakfast Member)
Worked great. Thanks. We topped them with warm maple syrup that we simmered with a vanilla bean stick and served them with crispy, delicious, wonderful, amazing bacon!!

From Great Waffles
I've made this recipe several times They are crispy on the outside and light, as I do not like hard, heavy waffles. I do sprinkle chopped pecans on top of the batter just before closing the lid. Have not found another recipe to beat it.

From Cindy
I have made this recipe several times and get raves every time. They are light and crisp - melt in your mouth. The only thing I add to the batter is pecans.

From ABCHJR (Team Breakfast Member)
This recipe is fantastic. I have tried several waffle recipes and this one is top of the line. The taste is excellent and will make again. I used olive oil for salad oil. Thanks again.

Salad oil? Does that mean vegetable oil? Sounds like it could mean olive oil but that seems a little weird for a waffle? And as I'm writing this, I see one of the comments where somebody used canola oil. So uh... never mind. Question answered. Thanks!

From meadowview
Good recipe, just a touch eggy tasting but over all a keeper!

From hardy55
This must be an old recipe... who says salad oil anymore... I used canola oil. Good results. Good texture. Next time, add some vanilla or almond extract.

From Katie
These are SO good!!! Remember to put your waffle maker on a low setting or it will burn. I also added about a half cup of flour because it seemed a bit thin.

From nugget
I used this recipe and it WORKED GREAT!!

From Ducks
I made this according to the directions and it was great. My children came back again and again to have more.

From Mech1989
Yeah I'm also don't have waffle maker... is it possible just to cook it like pancake?

From luvwafs
After reading several reviews about the batter being thin, I decided to use only 1 cup of buttermilk and I added 1 cup of frozen blueberries. Came out pretty good.

Thank u for the recipe :) But isn't there a way to do it without the waffle maker??

From B4D
I made these for dinner. Were they ever good!

From Happy Eater
You can kill me with this Waffles!

From lsea
Too thin and eggy.

View all 40 comments for this recipe.