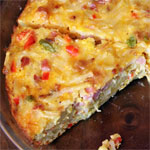 (5 servings)    Printable Version
I loved this one. The texture was perfect. There was a wide array of flavors in each bite. It was even kind of pretty compared to other breakfast casseroles. I opted to use both red and green bell peppers as those colors are usually in the best Denver omelets. I recommend doubling the amount of cheese so the dish tastes a bit more indulgent. When it comes to the frozen hash browns, please see an important cooking note below. If you like the flavors in a classic Denver omelet, you're gonna like this dish. I did! (This recipe was submitted in 2005. It was tested and photographed in August 2015.) 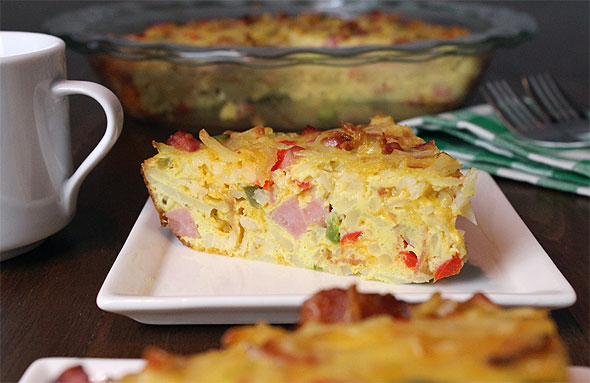 How To Make A Denver Omelet Pie

In a medium-sized cup or bowl, beat the eggs with onion powder, thyme, salt and pepper.

Bake at 350 degrees for 40 to 45 minutes or until knife or toothpick inserted in the center comes out clean. 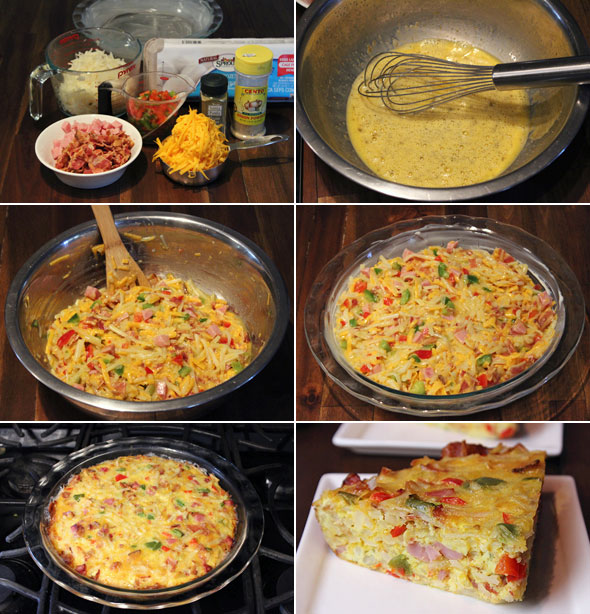 For the frozen hash browns: Don't just thaw them. After they've thawed, put them in the microwave and cook them for 3 minutes with 2 Tablespoons of butter - stirring after each minute. Partially cooking them assures that they will be fully cooked and tender in the final dish. Allow them to cool before mixing them with the eggs, etc.

When it comes to the dried thyme, don't take that mean ground, powdered, pale-white thyme. Use the kind that consists of crushed dried leaves. Powdered thyme is too strong and off-putting. I tried it with both kinds, so trust me. If it’s pale, your dish will fail. If it’s green, you’re good to go. 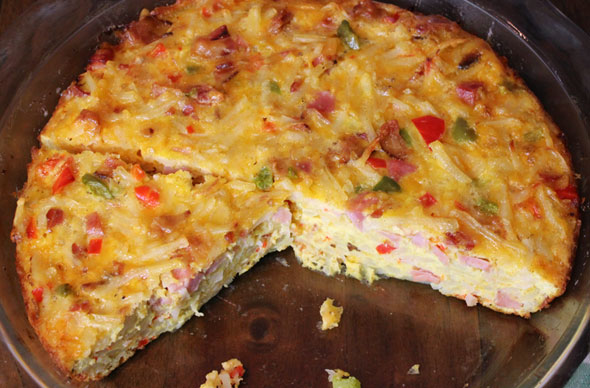 Really popular at family brunch. All the flavors of a Denver omelet in a quick-to-prepare, baked breakfast casserole that can serve a group.


Comments About This Recipe
What do you think of Denver Omelet Pie?
Overall Average Rating = 4 (out of 5)
Based on 2 votes.

Can this recipe be made up the night before but cooked the next morning?

From stevebo (Team Breakfast Member)
Instead of of just mixing the potatoes with the eggs, use them to make a crust. Really easy... drain them super good. Line the pan with them. Pre-bake just the crust for 15 minutes. Then mix the rest of the stuff and bake. Trust me. Much better that way.