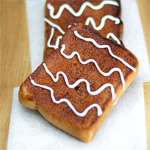 (3 servings)    Printable Version
This is a quick and satisfying French toast kind of a thing. You mix a couple things together and spread it on bread, then broil. The sweet topping bubbles and creates a layer of butterscotch goodness on top of each slice. The mixture doesn't penetrate the bread like traditional French toast. But if you use a decent bread, you can achieve a French toast-esque taste satisfaction with a quarter of the effort and clean-up. (This recipe was submitted in 2004. It was tested and photographed in August 2014.) 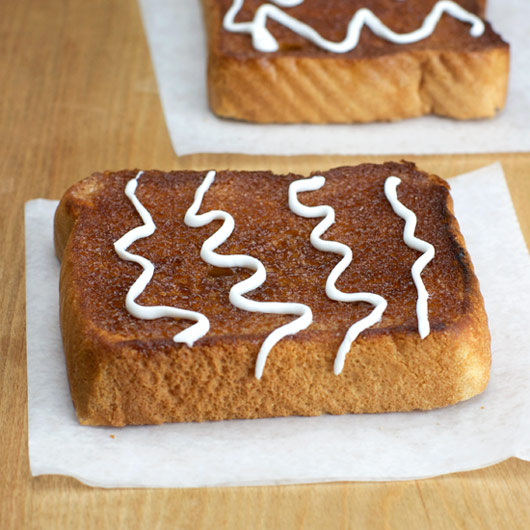 How To Make Butterscotch Toast

In a small mixing bowl, mix all ingredients until smooth.

Lay toast on an ungreased baking sheet. Spread even amounts of mixture on toast.

Broil toast (425 for about 10 minutes) in oven until topping becomes bubbly. 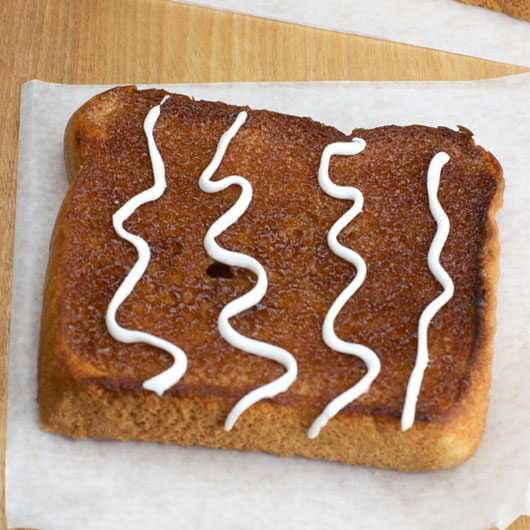 To spice up the photographs, I drizzled a little store-bought vanilla icing over each slice of toast. Truth be told, it also spiced up the flavor and made the toast that much better. Also, instead of light cream, I used heavy cream. It's just enough to make the butter and brown sugar easy to spread. Milk would have worked just as well.

Just four ingredients are required to make this simple yet delicious toast treat that makes a great breakfast or a terrific snack.


Comments About This Recipe
What do you think of Butterscotch Toast?
Overall Average Rating = 4 (out of 5)
Based on 1 vote.

From Frenchie
Don't broil it for 10 minutes. It took me about 3 minutes.

From A. Nony Mouse

The first step shouldn't include "all ingredients", because you aren't going to mix the bread in first off!