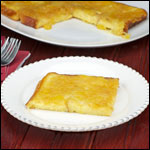 (6 servings)    Printable Version
This recipe was submitted by "MamaMia" who has contributed many great recipes to the site including her super well-reviewed Mashed Potato Pancakes. This afternoon (3/2/13), I decided to finally try her Pineapple French Toast and I'm glad I did. I had to adjust the recipe slightly for an 11 x 8-inch pan. I reduced the number of bread slices to 4 and cut the milk to 1 cup. I also added 1/4 teaspoon of vanilla to the egg mixture. Other than that, I made it as stated. This French toast is fantastic! It's sweet and buttery. The pineapple makes a big impact on the overall flavor. This dish is a winner. I hope you try it. 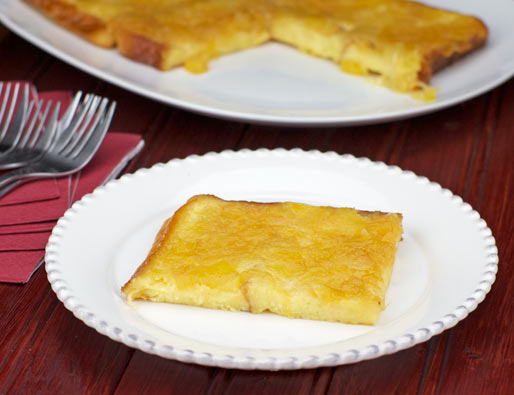 In a medium bowl, combine butter, sugar and pineapple. Spread on bottom of a lightly greased 13 x 9-inch baking dish. Top with bread.

Clean the bowl and re-use to beat eggs with milk and salt. Pour mixture over bread.

Bake uncovered for 25 to 30 minutes or until the top starts to brown.

Cool for a few minutes and carefully invert onto a serving platter.

Cut into 6 pieces and serve warm. No maple syrup necessary. 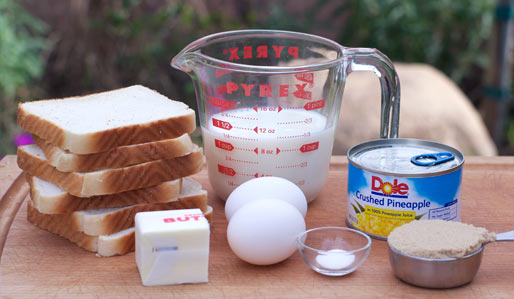 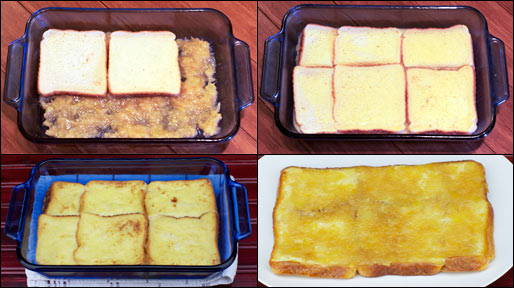 Note: If desired, you can assemble everything in the baking pan and refrigerate it for a few hours (or even overnight) before baking it. 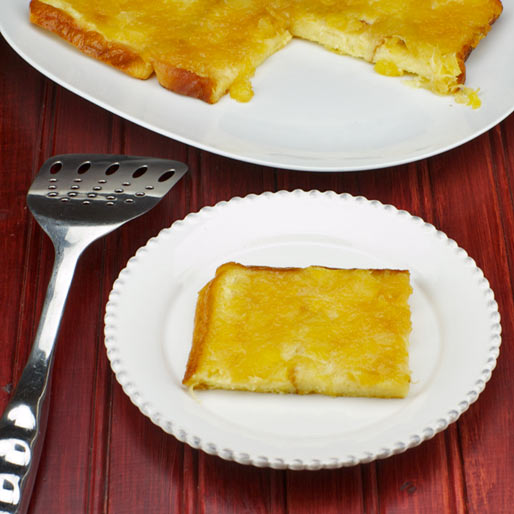 You invert this French toast onto a platter like a Pineapple Upside-Down Cake. My family loves this. I hope yours does too!


Comments About This Recipe
What do you think of Baked Pineapple French Toast?
Overall Average Rating = 4 (out of 5)
Based on 10 votes.

From Y.E.S.
I doubled everything and did two layers of bread in the pan (with a layer of pineapple, eggs, etc. in between the bread layers).

From D. Shaw
I make a very similar recipe. The trick is to cover it and refrigerate it 2 or 3 hours before you cook it and then all the flavors meld together. Wonderful.

This is such a great recipe.

From Clairee
Substitute one large banana sliced instead of the pineapple to make a mock version of Rain Forest Cafe's 'Tonga Toast' - Out of this world!!!!

From AliBri
The kids loved it!

From David Mac
My name is David McIntyre, This is the best food in the world, even better than McDonalds BIG MAC!

From Terry
Made preview of this for my husband. We both loved it. Just the right combinations of flavor and texture. Will definitely make again.

From SuperDuper
We love this recipe. It is only made on special occasions like birthdays.

From t-bird
Did you drain the the pineapple? We used a little less milk... maybe a cup after we read your comment and it worked out fine.

From Tatorchip05
This was absolutely disgusting. It came out like pudding. I prepared the dish as stated and had to bake it for an additional 10 minutes then I tried to broil it to finish. That didn't work so I tried to pan fry the bread to cook it but that didnt work either. Perhaps dipping the bread in the mixture and not pouring it in the pan would help. However, as far as I can see there's no hope for this recipe unless you'd like sloppy pudding for breakfast. STAY AWAY!!