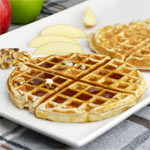 (6 servings)    Printable Version
I liked this recipe quite a bit. It has loads of flavor and no matter how small you dice the apples, you still get bites with just the lightest welcome crunch. I topped my servings with pure maple syrup. Like I always say... if you take the time to make waffles from scratch, you should top them with the good stuff. Walnuts made the perfect garnish. I got 5 (almost 6) round waffles from the ingredients listed. Thanks to 'Sarah_12' for giving us this recipe. (Tested and photographed by Mr Breakfast in June 2013.) 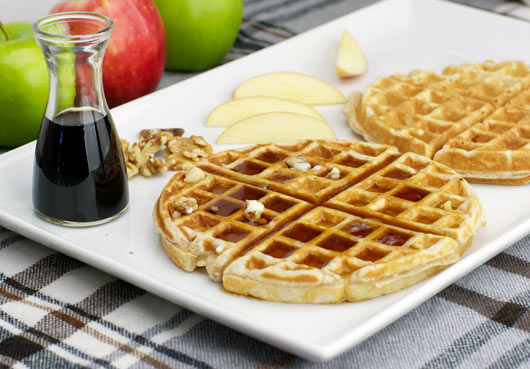 How To Make Apple Cinnamon Waffles

Sift together flour, sugar, baking powder, and salt. Set aside.

In a small bowl, beat egg whites until stiff; set aside.

Add sifted dry ingredients to egg yolks and mix until moistened (be careful not to over mix).

Bake in preheated waffle maker for at least 4 to 5 minutes, until crisp and brown. 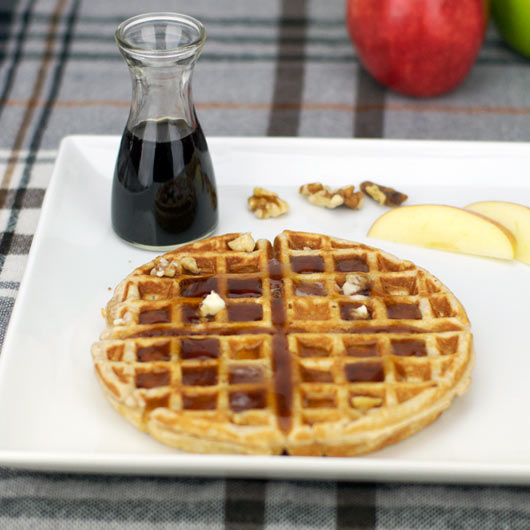 You can also try adding different fruits and spices instead of apple and cinnamon. For toppings, maple syrup is great, as is apple sauce and a dollop of whipping cream.

Mr Breakfast would like to thank Sarah_12 for this recipe.


Comments About This Recipe
What do you think of Apple Cinnamon Waffles?
Overall Average Rating = 5 (out of 5)
Based on 52 votes.

View all 61 comments for this recipe.

From stockton
Delicious! Crisp and full of cinnamon flavor. Great with fresh berries!

From Sam-sational
I added some raisins and it put it over the top! Delicious!

From Beaverz
These waffles are awesome!

From sdlc18
I love these waffles! I make a huge batch of these and freeze them to have on hand for the kiddos since they love their breakfasts hot. Cereal doesn't do well with these kids.

From Kim (LilMama)
As a kid, I loved the Eggos Apple Cinnamon Waffles but now I can't find them anymore so I figured I would make them on my own and this worked perfect. They are better than Eggos. LOVE THEM!

From Cartman60
My batter came out very heavy and stiff, checked my measurements and they were spot on. Needed more milk I would say. Flavor was pretty good, maybe a few drops of apple flavoring to push it over the top.

Don't over-mix, but add the oil after the dry ingredients have been mixed with the egg yolk mix? Bad idea. What a mess.

From Maria
Loved this! I added some vanilla extract in the mix and it turned out great ;)

From Mel G.
Not bad.

From Vicki
So tasty. I served mine with an apple cider syrup.

Would love to email this to myself. How?

Note From Mr Breakfast: You can use the "share" button above the recipe title and it will give you the option to email the recipe. Thanks for the question.

From K. J.
Omg... I just made this and my husband and son loved it as well as I. The only thing is that I didn't make a double batch. I got 4 waffle. I could have gotten 5 waffles out of it but I second guessed.

From Starr4
I tried this recipe today. It was delicious! I actually grated my apple and it cooked perfectly in the waffles :)

From Brody
Add apple slices separately, one to each section of the waffles. Or dice the apples so they spread out more evenly when you pour the batter into the iron.

From shoe
Our favorite new, go-to waffles. Thanks! They are the very best!

From Crpaez (Team Breakfast Member)
I love to make this waffle recipe. It's easy and quick. Thanks!

What would be the best kind of apples to use on this recipe?

From Marko H.
Good stuff! I especially like the edges where bits of apple touch the waffle plates and get a little caramelized. We just used butter and maple syrup for the topping.

From kimm
These came out perfect, with no substitutions. Wish I'd have read the comments and added a bit of vanilla, though. I don't make waffles often, but I'll keep this recipe around.

View all 61 comments for this recipe.