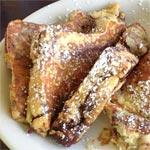 Cut each slice of bread diagonally in half. Brush both sides of all bread with melted butter.

Remove bread from oven and increase oven temperature to 350 degrees.

In a separate larger bowl, beat the egg whites until soft peaks form. Gradually fold egg yolk mixture into the beaten whites. Pour this batter over bread slices in pan.

Bake until top is brown, about 25 minutes. Sprinkle with powdered sugar.

Cut into 4 portions and serve with warm maple syrup.

I was looking for a recipe for Denny's Cinnamon Swirl French Toast and found this. It doesn't look the same, but I think it tastes better!

Mr Breakfast would like to thank skibunny for this recipe.


Comments About This Recipe
What do you think of Cinnamon Swirl French Toast?
Overall Average Rating = 5 (out of 5)
Based on 9 votes.

From Michael A.
I loved it, don't know which was better, the wonderful smell, or the great taste! I think anyone who likes french toast would love this recipe.

From c.a.n.
This is the best french toast ever!

From red21
We liked it. Not the all-time-best. But definitely satisfying. I'd suggest that people read all the comments. Especially the one from Cheryl D.

From triplet2
I think this is a really good recipe!

I like this recipe. It is so easy that children can help with it. My children love to cook. Thank you.

From Spicy Guy
I LIKED THIS RECIPE A LOT BUT THERE WAS SOMETHING MISSING.I THOUGHT IT COULD HAVE USED SOME SPICY-NESS TO IT BUT I'M A SPICY TYPE OF GUY.

From FirstTimeFrench
I've never cooked French toast and it came out awesome and delicious. Thanx!

From No Nickname
Very nice! We all loved it.

From Cheryl D.
My kids love this french toast. I have streamlined it though. I use the Sara Lee Brown Sugar cinnamon bread and only make half the recipe. You use about 10 slices of bread (2 of them you cut in half). I mixed up the brown sugar, butter and cinnamon and spread it out on the sprayed cookie sheet. Dip the bread in the egg mixture and then put them on the cookie sheet. You bake it for the 25 mins and you end up with wonderful french toast that taste like a sticky bun without the nuts! Add a little bit of maple syrup if you like. And we like! And our favorite time for breakfast is for supper!