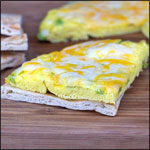 (1 serving)    Printable Version
This recipe was submitted by "angseu" way back in 2003. Jump ahead to December 2012 and I finally got around to trying it myself. The recipe as written (below) turned out great and definitely cheesy, but here's a couple tips. Make sure you dice your pepper very small as it won't soften very much during cooking. You might consider sauteing the diced pepper in a Tablespoon of butter and then adding the egg mixture to that - giving it a quick stir right away in the pan.

I like to flip the entire fritatta in the pan when it's almost fully set. Then I sprinkle it with cheese, cover it and turn off the heat. When the cheese is melted, it's ready to be served. As you can see from the pictures, I served it with toasted pita bread. It turned out that a piece of pita was the same exact size as my fritatta. 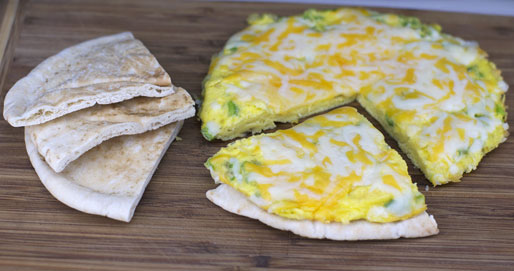 How To Make A Three-Cheese Fritatta

Beat the 3 eggs with the milk. Season as desired with salt and pepper. Stir in the diced bell pepper.

Place a frying pan over medium heat and grease with cooking spray or butter.

Add the eggs to the frying pan. Sprinkle with the cheeses and cover.

This will cook fairly fast so you'll want to keep checking on it.

When it's done, slide it out of the pan onto a plate and garnish with addition diced red peppers if desired. 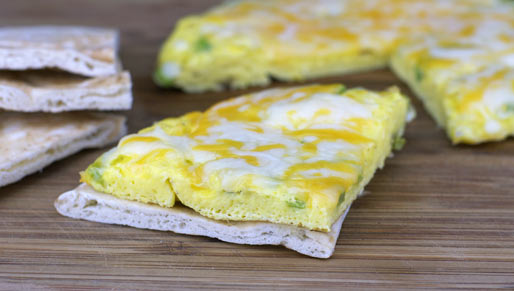 A must-try for cheese lovers. This fritatta has Cheddar, Jack and Mozzarella cheese. A little red or green pepper adds color and a certain freshness.

Mr Breakfast would like to thank angseu for this recipe.


Comments About This Recipe
What do you think of Three-Cheese Fritatta?
Overall Average Rating = 5 (out of 5)
Based on 3 votes.

From kikiIloveu
I love this recipe! Came out fine!

From malone
This is good for a quick fritatta. Most the other recipes have you finish it in the oven, but if you put the lid on top right away it did cook the eggs completely. Would be better if you you sauteed the peppers first.

From Reba88
Direction didn't include amount of cheese. I used a heaping Tablespoon of each and that amount seemed right.