Slideshow of images uploaded for Wheaties from General Mills

Return to the main page for Wheaties
◀ PREVIOUS
NEXT ▶ 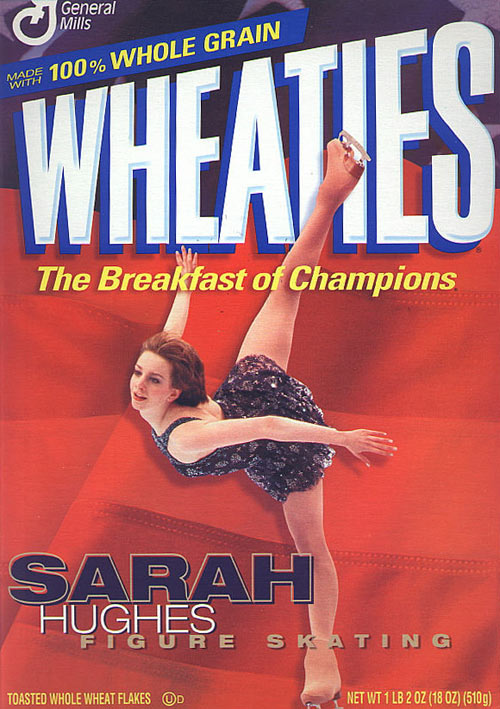 This is from the press release General Mills issued to announce this box:

Her breathtaking gold medal performance in Thursday's figure skating finale captured the hearts and imagination of the nation, and now America's newest champion is being honored on the cover of the fabled orange Wheaties box. At a press conference today in Salt Lake City, Wheaties announced the release of a new package honoring women's figure skating champion Sarah Hughes.

Hughes entered the long program in fourth place following Tuesday's short program. She embraced the challenge, turning in the performance of a lifetime by flawlessly skating the most difficult program ever attempted in the competition's history. Her brilliant routine secured the gold medal and a place in figure skating history for the 16-year-old from Great Neck, N.Y.

"Winning a gold medal is something that I've dreamed about for most of my life," said Hughes, who began figure skating at age three. "To top it off, now I have my own Wheaties box. This is really a dream come true."

Gymnast Mary Lou Retton, a Wheaties alum and winner of five gold medals in Los Angeles in 1984, helped Hughes unveil the package. "Sarah reminds me so much of myself when I was her age competing on the world stage," she said. "The thrill of appearing on the Wheaties box is something I will never forget, and I'm so happy for Sarah to be sharing in this great honor."

The soon-to-be-released 18-ounce package will be available nationally beginning in March, and continues Wheaties' storied tradition of honoring great athletic champions dating back to Johnny Weismuller and Babe Didrickson in the 1930s. Other notable winter sports honorees include Kristi Yamaguchi, Eric Heiden, the 1980 U.S. men's hockey team and the 1998 U.S. women's hockey team.

"There were so many great performances in Salt Lake City, but Sarah's breakthrough triumph in figure skating truly captured the country's imagination," said Wheaties Marketing Manager Brian Immel. "She undoubtedly represents the very best of the championship ideals that have made Wheaties `The Breakfast of Champions' for nearly 80 years. She is a great addition to the elite group of athletes who have graced the cover of the Wheaties box over the years."